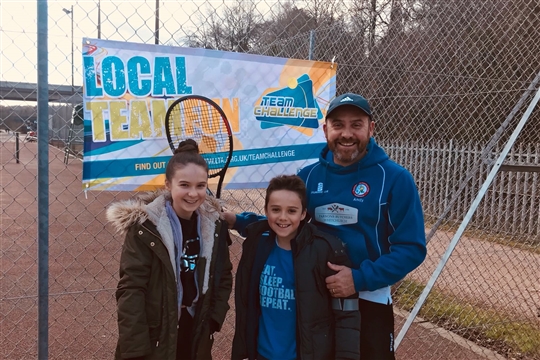 Spring is upon us and it’s time to up your game! That’s what family members of Lisvane Tennis Club did on the afternoon of Sunday 25th March. Luckily the weather was kind to us and it was a beautiful, warm, sunny afternoon …perfect for tennis! We organised a fun family green ball competition for both juniors and parents. Teams comprised of sibling or child and parent doubles pairs. The event involved timed 15 minute matches in an extended tie-break format. Each point won counting for one point.

The event was supported by Tennis Wales who provided prizes, banners, medals and certificates as part of their Team Challenge programme.

Entries ranged from aged 7 to much older parents! Two groups of eight pairings played concurrently and the top two scoring pairs from each group played in a close run final at the end of the afternoon. In one final Will Jowett, the current men’s Club Champion (aged 16) teamed up with his Mum, Kate. They competed against the Piper twins, Caitlin and Erin who took time out on their 14th birthday to enter the competition and are currently Ladies Doubles Champions at the club. A very close, exciting match cheered on by families from the balcony with the Jowett’s winning 20-14. Third place was awarded to the Sellers siblings, Jack & Harry.

The other final was another thrilling match, Oliver Fournier and his Mum, Rachel played against Finley De’ath and his Dad, Russell. The final result was 18-13 to the Fournier’s. Will Morgan, one of the club’s keenest players and his Dad, Rob were very narrowly beaten into third place. Winners and runners-up were awarded tennis themed goodie bags, thanks to contributions by YC Sports and Tennis Wales.

The event was supported by a great number of families who made cakes and helped with organisation of the event. We ran a tennis lucky dip, sweet shop, cake stall and café. Thanks to everyone who supported the club and made the day a success. Particular thanks go to the Moreira family who ran the café for the afternoon.

During the event Tony Symons-Hicks, the Club Coach ran a highly contested serving speed challenge. Interestingly the overall winner was his son, James Symons-Hicks with a club record breaking speed of 118 mph! In the Ladies category Caitlin Piper was the winner with a speed of 89mph. The U14’s frontrunner was Jack Sellers with a speed of 70mph and U10’s top scorer was Finley Mudie with a speed of 54mph. Will Jowett and Rebecca Saunders also helped out running a selection of fun tennis games and challenges for the younger junior club members during the event.

All in all a total of just over £300 was raised towards fundraising for the court resurfacing project. Roll on the next fundraiser……we still have quite a way to go!

Well done to Caroline Holroyd and all her helpers for organising and running the day.