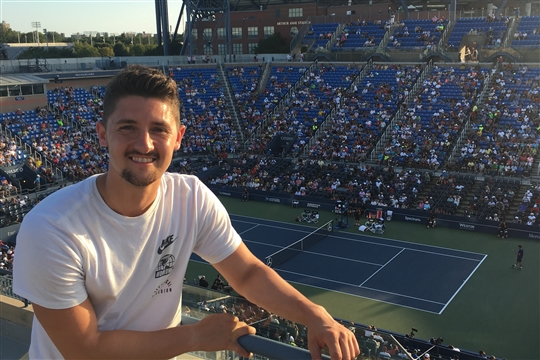 Me, Myself and Tennis

Well, this is my first ever blog post. Exciting! First of all, I’ll start off with saying… I love Tennis and I am extremely passionate about British Tennis in particular. Oops, I think that I had better introduce myself first before rambling on about how much I love Tennis. Dean Eagles is the name and all things Tennis is definitely the game. I am writing this blog because I would love to talk to you about British Tennis, Tennis in general, and all things Tennis in the Midlands. I’ve recently started working for the Lawn Tennis Association (LTA) as a Regional Tennis Services Advisor in the Midlands Participation team which as you can imagine I am loving!!! Prior to my role with the LTA, I worked as an Assistant Tennis Coach at Basford Lawn Tennis Club in Newcastle-under-Lyme. Tennis coaching is a big passion of mine and there is no better feeling than seeing others have fun on the tennis court. I worked as an Assistant Tennis coach alongside achieving a first class BSc (Honours) in Sport & Exercise Sciences at Staffordshire University. Sport Science is another passion of mine and throughout University I had the aspiration of working as a sports scientist within professional Tennis. The area of sport science that I am most interested in is Sport Psychology. I am a keen player and love to play as much as possible, from a young age I’ve always played competitively, however my most competitive matches seem to happen when I am playing against my younger brother Jack, our styles are completely different – his ability to never miss can be quite annoying sometimes :)!

I got in to Tennis at the age of around 10 having watched our very own Tiger Tim play at Wimbledon on T.V. I loved the atmosphere of the match and the on court fighting spirit of the players and thought that I would love to try that….eighteen years on and I’m still playing, coaching and working in Tennis. I am an extremely keen spectator and LOVE to watch professional Tennis. I have been lucky enough to travel to Paris for the French Open, New York for the US Open as well as for the past few years camping out in the Wimbledon queue to get tickets for the whole first week of Wimbledon (so tiring but so so fun)! Just one more slam to go and then I have the ‘career grand slam’! Exciting! I have also been fortunate enough to go to all of the British grass court tournaments over the years including AEGON Classic in Birmingham, AEGON Open Nottingham, as well as several AEGON GB Pro-Series ITF tournaments. Just AEGON Championships at the Queens club to go which I will hopefully be able to attend this year. I have also attended the Wimbledon Qualifying event over the past few years at the Bank of England Sports Club in Roehampton. Wimbledon Qualies is a great opportunity to get up close to some great Tennis, and see players fighting their hearts out to get the chance to play at the prestigious All England Lawn Tennis Club. Wimbledon qualifying is great as it gives you the opportunity to see some great upcoming juniors players, as well as some strong ex top 100 players and also upcoming future British stars.

The AEGON GB Pro-Series ITF 15K event is going on at the Edgbaston Priory Club this week so I will be sure to blog on that throughout the week and keep you updated on what is going on.

I hope you enjoy my Tennis blog and if you have any suggestions or requests on what my next blog could be about then feel free to let me know.

Thanks for taking the time to read my first blog :)!