NOMINATIONS FOR YOUR COMMITTEE

UNLESS ANYTHING UNFORESEEN HAPPENS WE CAN HOPEFULLY LOOK FORWARD TO HOLDING AN AGM THIS SEPTEMBER, HOWEVER FOLLOWING THE RECENT RISE IN REPORTED INFECTIONS NO FINAL DECISION HAS YET BEEN MADE.

WE HAVE REACHED THE POINT WHERE YOU ARE OFFERED THE OPPORTUNITY TO HAVE YOUR NAME PUT FORWARD TO CONTRIBUTE TO THE CLUB BY SITTING ON THE COMMITTEE.  COMMITTEE WORK ENTAILS ATTENDANCE FOR ABOUT 9-10 MEETINGS IN THE 12 MONTH PERIOD.  IT ALSO INVOLVES CONTRIBUTING TO AND BEING INVOLVED IN THE MANY ASPECTS OF OUR CLUB’S ACTIVITIES.

YOUR COMMITTEE REQUIRES THREE NEW MEMBERS FROM WITHIN ITS RANKS.  IT NEEDS TO REPLACE TWO OFFICERS, A TREASURER AND A SECRETARY, AND ALSO A GENERAL COMMITTEE MEMBER.  THOSE ACTIVE ON THE PRESENT COMMITTEE HAVE INDICATED THEIR WILLINGNESS TO CONTINUE, AND EARLIER THIS YEAR CO-OPTED JONATHAN LATTER AS AN ACTING TREASURER TO REPLACE PHIL TOZE WHO HAS RETIRED.  JONATHAN’S CO-OPTION WOULD CEASE AT THE AGM AS HE HAS AGREED TO STAND FOR ONE OF THE OFFICER VACANCIES AS CLUB TREASURER.  HE IS THEREFORE THE COMMITTEE'S SELECTION.

NOMINATIONS FOR THE COMMITTEE ELECTION AT THE AGM  MUST BE SUBMITTED BY 31ST JULY.  PLEASE USE THE FORM SUPPLIED.  APPLICATIONS BY ANY OTHER MEANS ARE INVALID (SEE CLUB RULES 8 & 14).

MEMBERS SEEKING ELECTION REQUIRE A PROPOSER AND SECONDER, AND SHOULD ADDRESS THEIR APPLICATION TOGETHER WITH THE PROPOSER’S AND SECONDER’S SIGNED CONFIRMATIONTO THE CHAIRMAN AND POST IN THE RED BOX BY THE VENDING MACHINE.

A planned refurbishment is scheduled to begin around 9/10 June.  Only one changing room will be available whilst the other is worked on.

The still available room will become a unisex facility with a privacy lock activated from within.
We have received partial funding in the form of a grant from Sport England as part of their now closed "kick start" fund.  Grants were only available to those activities located in classified areas of deprivation such as Hastings Borough and had to be related to Covid protection.  Certain other criteria also applied; our LTA registration was just one.

We look forward to a significantly upgraded facility for our members and visitors.

Subscription rates for new members are listed at pro rata rates from May onwards.

We are in St Leonards-on-Sea, in the heart of south-east England's 1066 Country.

Located off-road in a quiet residential area with vehicle access from Tower Road West, the club provides a safe and secure environment which is ideal for families and young children.  The club welcomes players of all standards and particularly encourages those new to the game.

There is a licensed members bar, comfortable lounge area and use of the kitchen.  Changing rooms with showers are also situated in the clubhouse.  Wi-Fi is available.

The club  has five acrylic and four fast-drain macadam courts.  Floodlights on the acrylic and macadam courts enable them to be used until 10 pm all year round.  Courts are available for club members at all times.  Certain courts are set aside for junior play at specific times to ensure that all age groups are catered for.  Members are entitled to bring visitors to play on payment of a small daily charge.

You can join at any time in the club year as fees are scaled down as we move through the year.  Please have a look at our membership options to see what suits you.  Instalment payment details  are available on request for some categories. 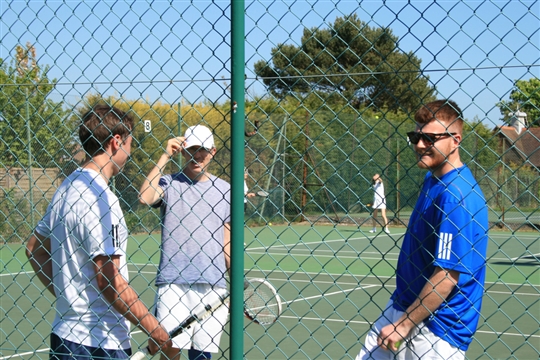 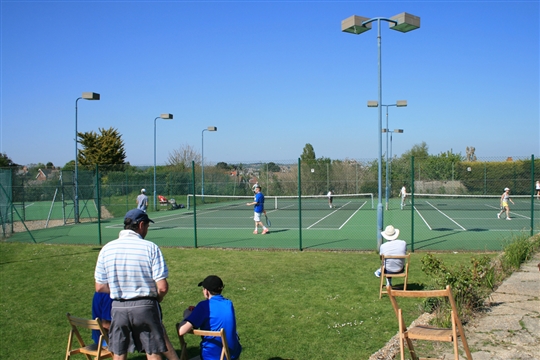 A fresh look for the new year.

about a year ago

Come and play some tennis, join The Green LTC today!

We want you to enjoy your tennis and play loads! Whether you've played lots or not at all, there's a membership to suit you ...