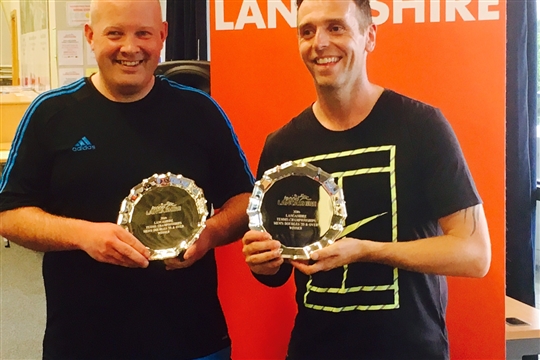 Thursday 18th August was the start of the Lancashire County Championships held at Bolton Arena, Burnley Tennis Club had a record entry at the Championships this year with players playing singles and doubles in Junior, Men, Ladies and mixed competitions

Mark Rushton Woods was the clubs first County Champion when he defended his 18U Singles County title with a breath taking performance in the final against the number 1 seed from Manchester, Mark played some incredible tennis controlling long rallies from the start with a series of crushing winners that left his opponent with no answer to Marks variety and court craft, Mark cheered on from the stands by his family and club mates completed a 6-2 6-2 demolishment of his opponent to lift the 18U title for a second time

The shock of the tournament came in the Men’s 35O Doubles final when Jez Palmer & Scott Northey from Burnley Tennis Club completed what can only be described as a fairy tale ending. The Burnley pair only decided to enter the competition last minute and though they have played together a number of times before in club matches it was a first appearance at a County Championships for them both

Palmer and Northey had a touch opening match against a strong pair from the same club when they came up against Lee Stretton and Stephen Greenwood, Palmer and Northey played some fantastic stuff throughout the competition and nothing to lose, in the semi-final they would have to come up against the number 2 seeds and last year’s winners but against all odds they knocked out the favourable pair winning in straight 7-5 6-2 to earn their place in the County Final. In the Final Palmer and Northey expected a very tough match against the number 1 seeds and this is what they got, for the first time in the competition the pair from Burnley lost the opening set 6-4 as their opposition laid down the gauntlet, Palmer and Northey just had to keep playing their game and they did winning the next set 6-2 with some outstanding doubles play to take the match into a championship tie break, the first to 10 points would be County Champions, Palmer & Northey left nothing on the court and played aggressive tennis to stun their opponents with a fantastic 10-5 win to win the title

The club is extremely proud of everyone who played and represented the club throughout the 2 weeks. Elaine Varcoe was runner up in the ladies 35o singles tournament, after losing her first group match she bounced back with 2 crushing wins to take the runner up spot.  Mark Rushton Woods reached the men’s doubles and open men’s singles semi-finals, Christine Holt and Scott Northey reached the semi-finals of the Mixed 35o doubles, Lee Stretton unlucky not to reach the men’s 35o singles final losing in the semi-finals in a shootout match tiebreak, Christine Holt bounced back in the quarter finals from a set and 5-2 down to take her ladies 50o singles match to a shootout tie break after stroming back from the brink of defeat where she just lost out 10-8 in a final set

Jo Heywood and Elaine Varcoe nearly pulled of a huge shock knocking out the number 1 seeds in the ladies doubles but lost out again in a third set shoot out match tiebreak, Jo Heywood a current county player narrowly missed out on a place in the ladies 40o doubles final, Christine Holt and Tiffany Deaville gave a good account of themselves in the ladies open doubles with Tom Maullin and Danny Fleming pushing their opponents all the way up against very strong opposition, Scott Northey won through to the last 16 of the Men’s Singles and again lost on a match tiebreak third set, Danny Fleming and Gia Varcoe up against the number 4 seeds in the first round found the going tough before bowing out. Marley Byrne won his first round match in the 18U boys singles but was then eliminated by finalist and number 1 seed in the last 16

Lucas von Heuser Mason again proved what a fantastic tennis player he is going to be with some strong wins in the boys 8U singles, Lucas won 2 of his 4 group games against a strong pool of players, Lucas then competed in the consolation competition which he went on to win with a 10-3 victory

The club is looking for players of all ages and abilities to get involved in Tennis, we currently have something for everyone and the Clubs Junior Coaching programme will restart next week as the children return to school, tennis coaching available for children aged 5-16 year, and adult men and ladies

Burnley will be running 6 winter indoor tennis teams this year, get in contact and find out more about the club who recently won British Tennis Club of the Year 2016