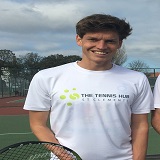 James is an LTA level 3 accredited + coach. His passion lies in growing tennis participation across all ages, and providing as fewer barriers as possible for people to start and sustain tennis as a sport for life. In the past this has included delivering island wide tennis sessions to primary schools and coaching LTA participation initiatives. He has been coaching full time for 7 years, previously undertaking a Sport development degree at the University of Chichester, before working as a club coach at the Caesarean Tennis Club. James has represented Jersey and the Channel Islands throughout all age groups growing up, including being part of the 2015 Island Games gold medal winning tennis team and CI Mens Winter County Cup team.

Outside of tennis James has a keen interest in distance running and ran finished 147th in the 2017 London Marathon. He is enthusiastic about a number of sports, previously representing Jersey in cricket, and will regularly try to convince people what a great football team his beloved West Ham are!