THIS NOTE SUPERSEDES ANY OTHER WITH RESPECT TO COURT BOOKINGS.
Waverley are asking members to limit  peak time slots to 1 hour  from 5pm (Mon-Fri).
Doubles can be booked for 1 hour 30minutes.

Please play within the spirit of the rules to allow everyone a chance to play.
Please no double session bookings in different names! Thank you.

Exceptions apply for formal matches,  get in touch if unsure.

LTA guidance can be found HERE.

Please follow Government and LTA guidelines with respect to tennis .

NEW TO TENNIS or INTERESTED IN JOINING THE CLUB? - PLEASE  EMAIL FOR MORE INFORMATION.

WOMENS CLUB NIGHTS , WEDNESDAYS - come along
GENERAL CLUB NIGHTS, TUE/THU- support the club, make it your tennis fixture
SINGLES LADDER - you can join in at any time - Finals to be played on 18th September2021

LADDER 2021 finals were contested by four strong ladder players, and a champions tie-breaker would be needed to find this years winner.

But before we get to that let's run over the memorable performances of the day.

Saturday September 18th saw the finalists arrive onto the sun drenched hard courts of Waverley.  Excitement was building from an expectant crowd.

How would the fab four perform?

STAGE1; a round robin tie-breaker was played as a warm up for the day and used to establish seedings for the knockout phase. Brantley, having just flown in from America suffered a couple of losses before getting a win over Mark. In turn Mark then showed confidence and took maximum points over Hugo. Hugo subsequently put aside all recent shoulder op issues and scored a famous win over Brantley. Meanwhile, cool as you like, no one could ruffle Daryl - maximum wins, seed numero uno.

Daryl was ruthless in his ambition - Mark's flamboyance couldn't quite tame the solidity from Daryl.

Having come to terms with his now sun warmed shoulder Hugo was plagued with a new niggle! And that niggle came in the form of Brantley. The earlier loss to Hugo was forgotten as the young Brantley played his historic best to overwhelm a somewhat fatiguing Hugo.

After some well deserved refreshments it was Mark v Hugo, for the 3rd/4th place play-off. Interest was high with pride and prizes at stake. Limited matchplay over the summer months and the hot September sun finally caught up with Mark. Hugo took the 3rd spot.

THE FINAL; Daryl v Brantley. It was business as usual as Daryl raced to a first set 5-2 winning position. No one could have dug deeper, Brantley, point by point, game by game, inched his way back to 5-5. Snacking on cheese rolls and blueberry muffins a re-energised Brantley became unstoppable, and stole the set, 7-5.

The afternoon sun was strong, adjusting his sun glasses the tracksuit bottomed Daryl got his game back on track with a one way ticket heading for a 3rd set champions tie-breaker. It was a true purple patch for sure, Brantley acknowledged Daryl was becoming too hot to handle, set two went 6-1 to Daryl.

A CHAMPIONS TIE-BREAK; With more spectators gathering, everyone was looking to Brantley to raise his game once more. Jet-lagged or jaded, now was the time to play. Daryl was indeed now the high flyer - but could he maintain it?

Thank you to all who took the opportunity to compete throughout the season.

If you would like more organised competitions, do let us know and feel free to make format suggestions. Remember it's your club.

WOMENS TENNIS EVERY WEDNESDAY THIS SUMMER

2020  SINGLES LADDER - FINALS DAY 3RD OCTOBER 2020
After a night of rain and wind, storm ALEX relented and the tennis got underway shortly after 12:30pm.
With conditions initially uncertain underfoot the bravery of Waverley elite players was as clear as the brightening sky.
It was an amazing day of tennis, adherence to the rule of six, hands/face/space was no issue at all. The magnificent 7 plus 1  played at levels seldom seen.
After a season of ladder matches every player involved who took to the court on this day was battle hardened and steadfastly immovable, no-one was here to give an inch.
With several categories being contested only the surefooted would prevail and indeed it proved to be the case.
Onto the results: OVER 45;  Joe, lion hearted, found that all his years of experience and Waverley heritage couldn't carry him to victory. New boy John had an arsenal of tennis that could not be denied. Well played John, nice shorts too!
OVER 30;  Steady as a rock and hard as steel, Sam was always going to be a tough nut to crack. Giving away a few years Dr.Hugo simply could not unravel the game style of the younger man. Everytime Hugo came close, Sam resisted and took control of matters.  The result could not have been closer, but Sam took the win.
MOST MATCHES; A reward for the players who supported the ladder competition by playing the greatest number of matches.  After two exciting semi-finals we had our finalists, both were tall men with a played match list as long as their reach. It was a game of two halfs, Like a greyhound Chris was lightning and in a flash had secured the first set. Hari took a time-out, had a good hard look at himself and amazingly turned the tables! Chris could not defend the second set ferocity unleashed by the racket of Hari. Just as the one-sided first set went to Chris, the second was supremely taken by Hari.  It was completely apt that the last match of the day would conclude with a champions tie-breaker. Nip and tuck point by point, Chris stole the win from a resurgening Hari.

We escaped the rain, the spectators got to enjoy some of the best tennis in Basingstoke this year. OK it may not have been Roland Garros, but the endeavour, ambition, appetite was no less. Well done everyone who took part - and thank you to the spectators for remaining social distant while supporting the event.

MEMBERS INFO..........
WANT TO REACHOUT TO OTHER MEMBERS DURING TIMES OF COVID?

WE WILL BE INTRODUCING A SECURE PLAYER LIST SO THAT MEMBERS CAN CONTACT OTHERS THAT ARE AVAILABLE FOR TENNIS AT MUTUALLY AGREED TIME.

IF YOU WANT TO BE ON THE LIST, AND WHY WOULDN'T YOU?, YOU SIMPLY NEED TO BE A MEMBER OF WAVERLEY AND  USE THE FOLLOWING LINK TO PROVIDE YOUR DETAILS. CLICK TO BE INCLUDED

Upcoiming events will be listed below

Waverley welcomes new players.
Waverley is a great place if you are looking to learn tennis for the first time, or returning to tennis, or looking for players to play/practice with.

Do get in touch, [email protected]

Well done to all who participated. A special thank you to everyone who helped and donated. Here are the PICTURES GRASS 2018.

A few pictures from another team event;  Click here for link.  Enjoy.


We are a short walk from Basingstoke town centre, close to the Basingstoke & North Hampshire cricket club.

Waverley is a tennis club for all levels of play, from junior to new starter to those who wish to play competitively. Waverley currently has two mens and one mixed teams competing in the Basingstoke summer and winters leagues.

Waverley has a great club house with changing, shower and kitchen facilities.

Little known fact about Waverley, Former British No.2, Davis Cup, and Wimbledon player Joshua Goodall played and learned his early years of tennis here!
It could be you next. 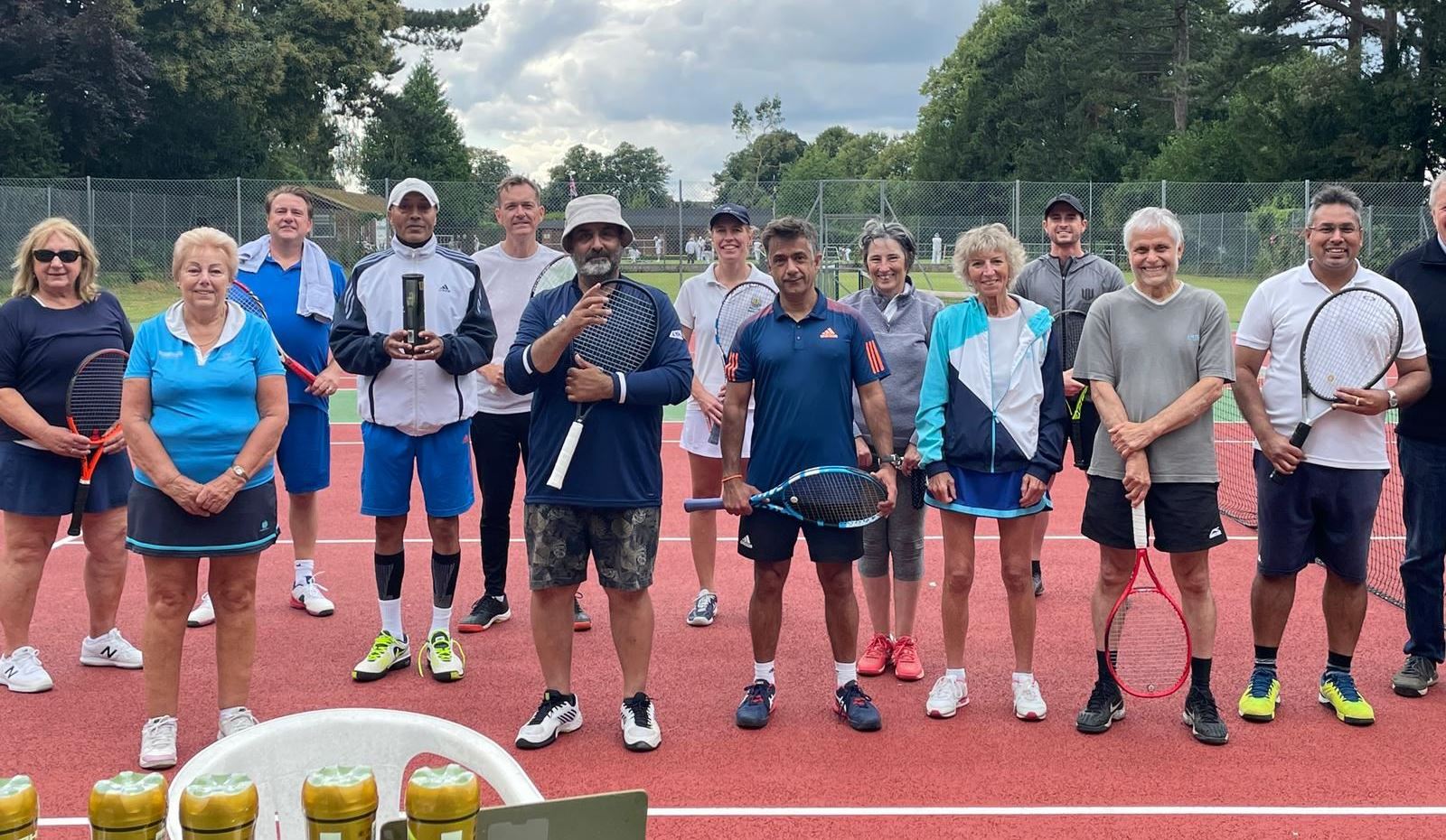