Many thanks to John Oliver and Dave Gullick for supplying historical information.

The roots of Cwmbran Tennis Club date back to the early 1960s with the founding club members’ links to what was a thriving yarn producing factory called British Nylon Spinners Pontypool Ltd, latterly Imperial Chemical Industries (ICI) Fibres in the late 1960’s. At its peak it employed 6,500 people and they looked after their workforce by providing excellent sporting and leisure facilities.

Ian Smyth was a Mechanical Engineer employed at BNS/ICI Fibres and was a member of their tennis section, as was Robina, his wife. Sadly both are no longer with us but Ian’s contribution is commemorated on a plaque attached the new clubhouse we have in Cwmbran.  Ian introduced many people to the club in the 1960s and over many years including John Oliver, Don and Irene Dodd, Jenny Law, Barry Davies, Robin Morgan, Bob Lawton, Carol Preece and others from the adjacent Parke Davies pharmaceutical factory (demolished in 2018). Parke Davis staff were granted associate membership, after the membership had been thrown ‘open’ when ICI started ‘slimming down’ its own workforce in the 1970’s.   Dave Gullick the current Chairman joined in 1979 as a 15 year old.

In 1985 ICI decided to sell off its Sports facilities.  Under the Chairmanship of John Oliver and assisted by the committee the club negotiated a deal with Torfaen Borough Council to locate to Woodland road Croesyceiliog operating as  ‘pay and play’ for the use of 2 courts for our club sessions and additional courts for matches.  Membership was in the region of 15 -20 members using the Woodland Road bar and social centre as our Club house.

The club changed it’s name to Cwmbran Tennis Club (ICI) leaving ICI in so people knew our origins and not to be confused with a former tennis club based at Woodland Road that were known as ‘Cwmbran Woodland Road’ and disbanded in the early 80’s.

In 1990 due to the deteriorating court surfaces at Woodland Road and a failed attempt to lease the courts from the local council with a view to developing the site privately, we started looking for an alternative site. There was clearly potential to develop a thriving club in the area with the right leadership and if a suitable location could be found.

Initially that year we moved to Llanfrechfa Grange Hospital using their two tennis courts and changing rooms to base the club while we explored other options. We attempted to negotiate a lease on the land at Llanfrecha to build new courts but they were concerned it would impinge on plans to develop the land for housing. The land is now being used to build the new Critical Care Centre for Gwent.

Barry Davies suggested we approach Peter Richardson the owner of Green Meadow Golf club to see if we could persuade him to let us re-locate to land within the curtilage of his Farmhouse just near where our courts were eventually built . Barry and John Oliver spent many hours, late at night, negotiating with Peter Richardson till he agreed we could.

In 1992 we obtained a 25 year lease plus an additional 25 years guaranteed if we requested it. Planning the project and seeking funding to get the construction of new courts started under the leadership of John Oliver.

In 1994 and with raised funds of over 80,000 work started on developing the land at the golf club.  Peter was very helpful as he undertook all the major ground works for us free of charge using his own plant and machinery which he was using to increase his golf course to 18 holes. Courtstall was the company given the contract to build to courts. They commenced constructing the courts in the spring and in October 1994 Barry Davies and John Oliver were the first club members to play on the newly constructed Tennis Courts comprising unpainted black tarmac.  At first only 3 courts were completed due to weather constraints.

1995 was the first full year that Cwmbran Tennis Club had its new home -  Green Meadow Golf Club. We had 6 new Tarmacadam courts which were eventually painted two shades of green. We didn’t have a courtside hut at that time and it was about 6 to 9 months before one of our members – Phil Stedman built us the original wooden hut himself at his own expense. Our membership at this time had just started to grow and was just over 40 adult members.

By 1998 Membership had grown to over 100 Adults and around 80 Juniors. The Club was now fielding seven teams in the Gwent Midweek league and 5 Teams in the South Wales League.  There was still potential to grow the club and its facilities by exploring options for upgrading the existing court surfaces and providing an indoor facility.  One of the options explored involved a club house to be constructed on the banking overlooking the courts equipped with some squash courts as well. This was not an option preferred by Peter Richardson our landlord so we dropped it in favour of other options.

During 2000, John Oliver and the Committee managed to attract funding of circa £240,000 to pay for a six court upgrade – 3 Artificial grass and 3 Acrylic and provide a Cable Air Dome over the 3 Acrylic Courts with removable floodlights on columns inside the Dome. The Courts where the Air Dome was to be housed needed to be widened and extended to allow for an international standard runback inside the Dome when it was erected and in use.  This work was completed in 2001 and the Air Dome and new courts were in place and ready to use. 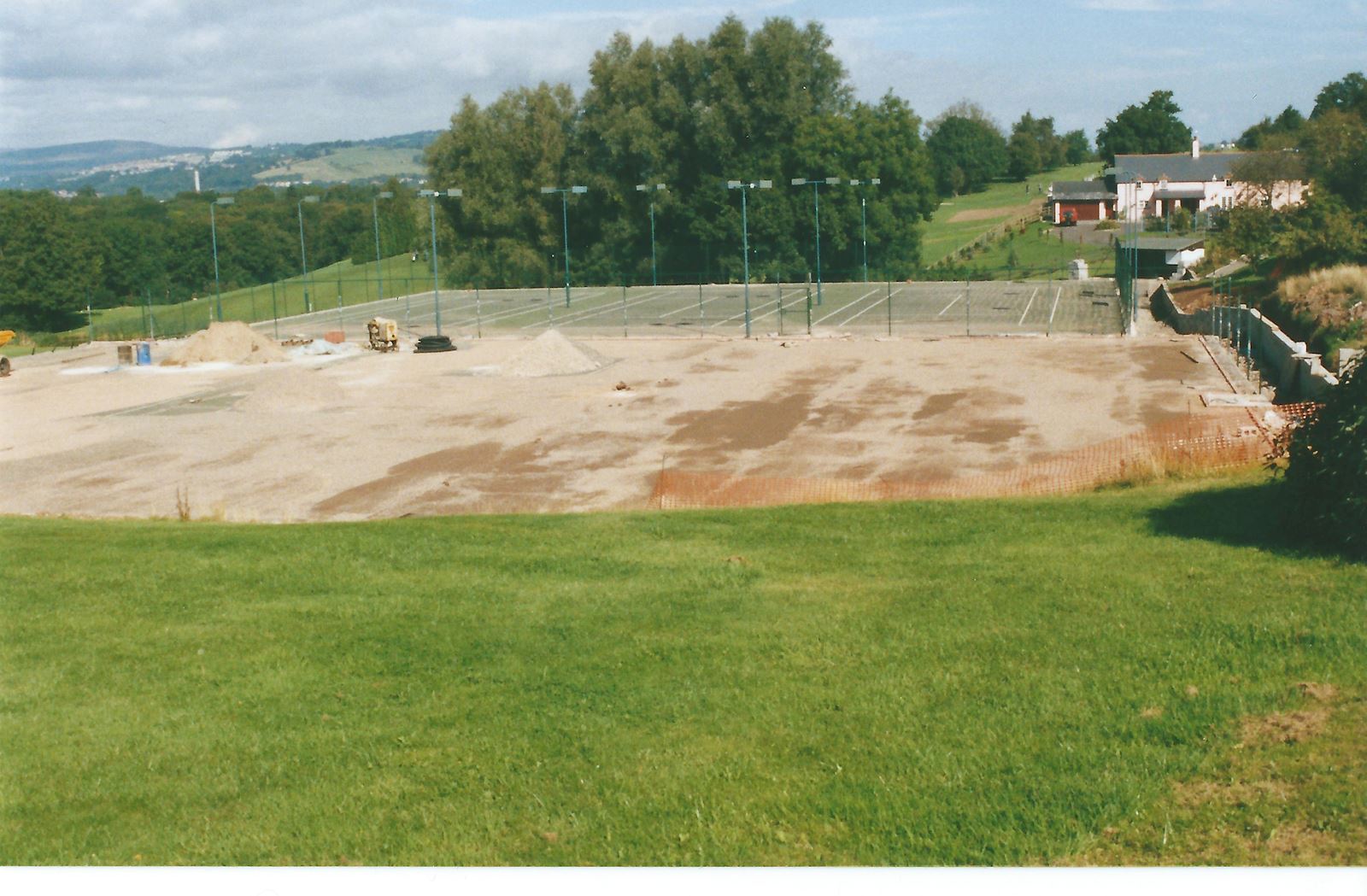 In 2004 during a particularly bad storm there was failure of a metal securing band on an air outlet and the original dome was destroyed.   Insurance paid for a replacement facility in 2005 but we could not gain insurance on the replacement facility leaving us with a future risk. 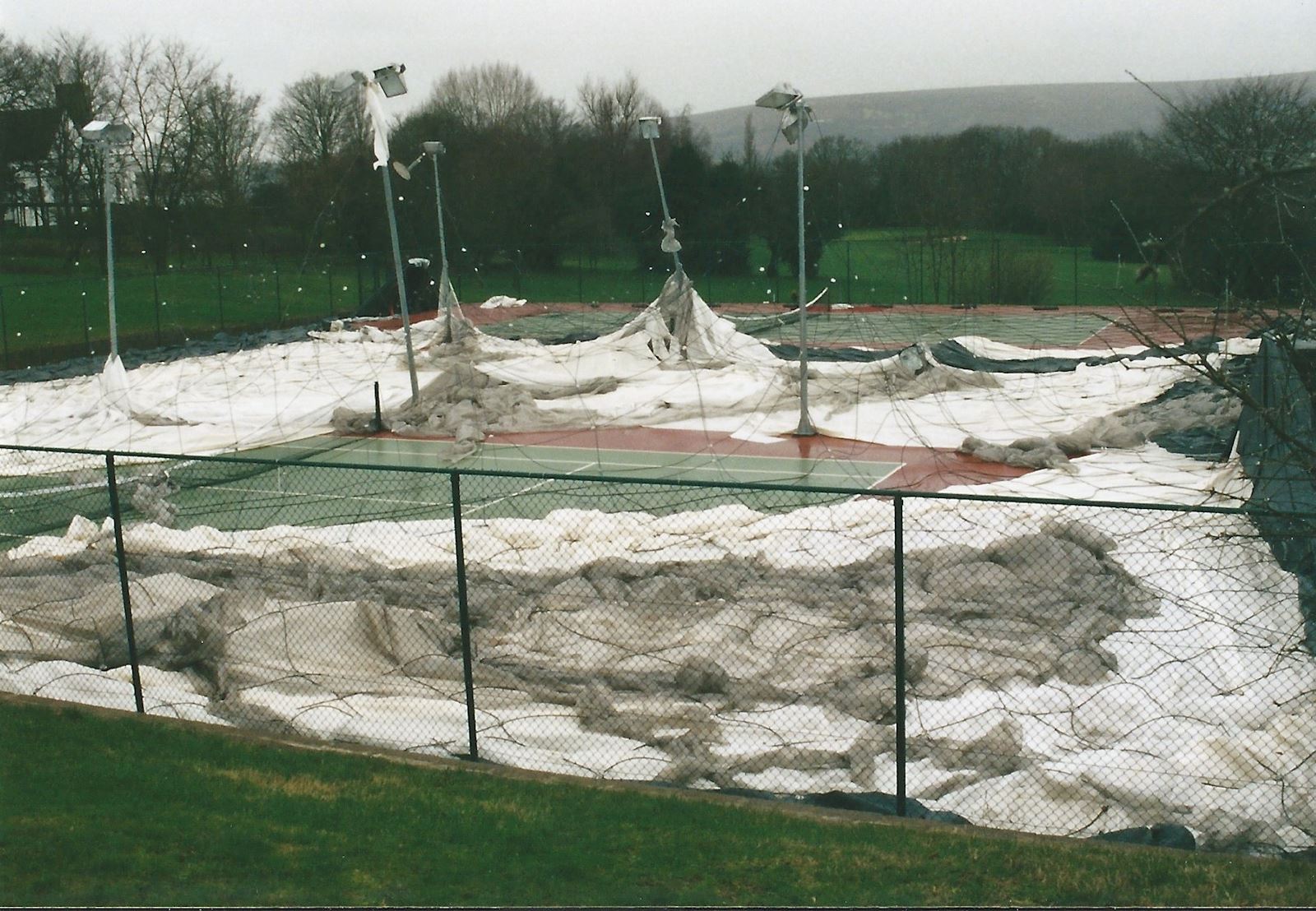 In October 2014 the club had saved enough money to replace the old wooden hut that had served us so well since 1995 and invested £17,000 in the new clubhouse that stands beside the courts today. 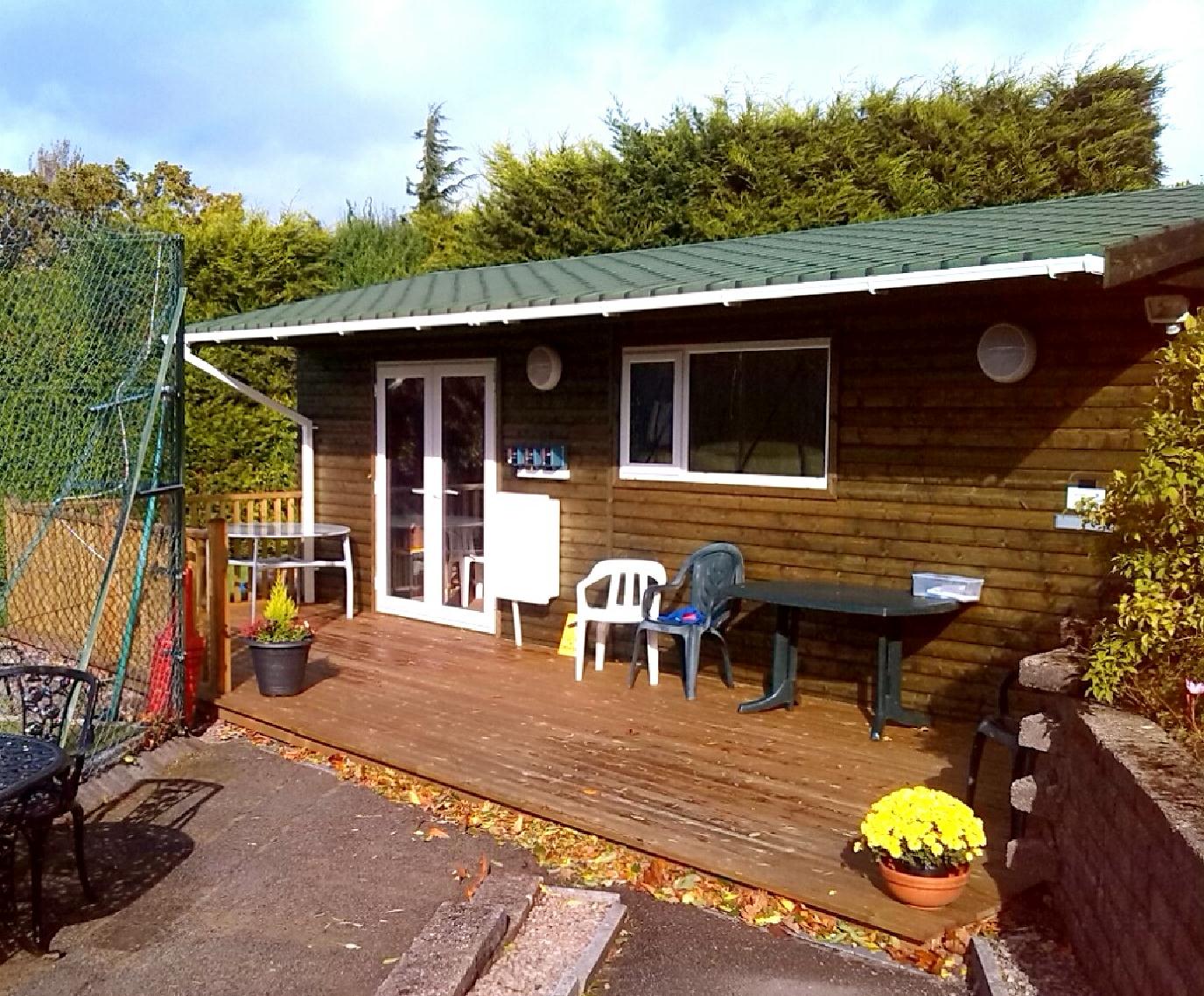 The club has continued to maintain and clean the existing courts over the years and they will need resurfacing in the next 4-5 years (2019-24).

As with many clubs we have relied on a small core number of dedicated people to maintain the dome and courts and this is a significant commitment.  Without the tireless support of Ian Murray who singlehandedly took responsibility for leading the maintenance of the dome and the wider facilities ably supported by others such as Martin Taylor, our dome would not have lasted as long as it did.
Due to planning regulations the structure had to be dismantled each spring and re-erected each Autumn which placed significant wear and tear of the fabric and foundation connections.  It was this wear and tear that eventually led to the wrecking of the dome by Storm Eleanor in January 2018. 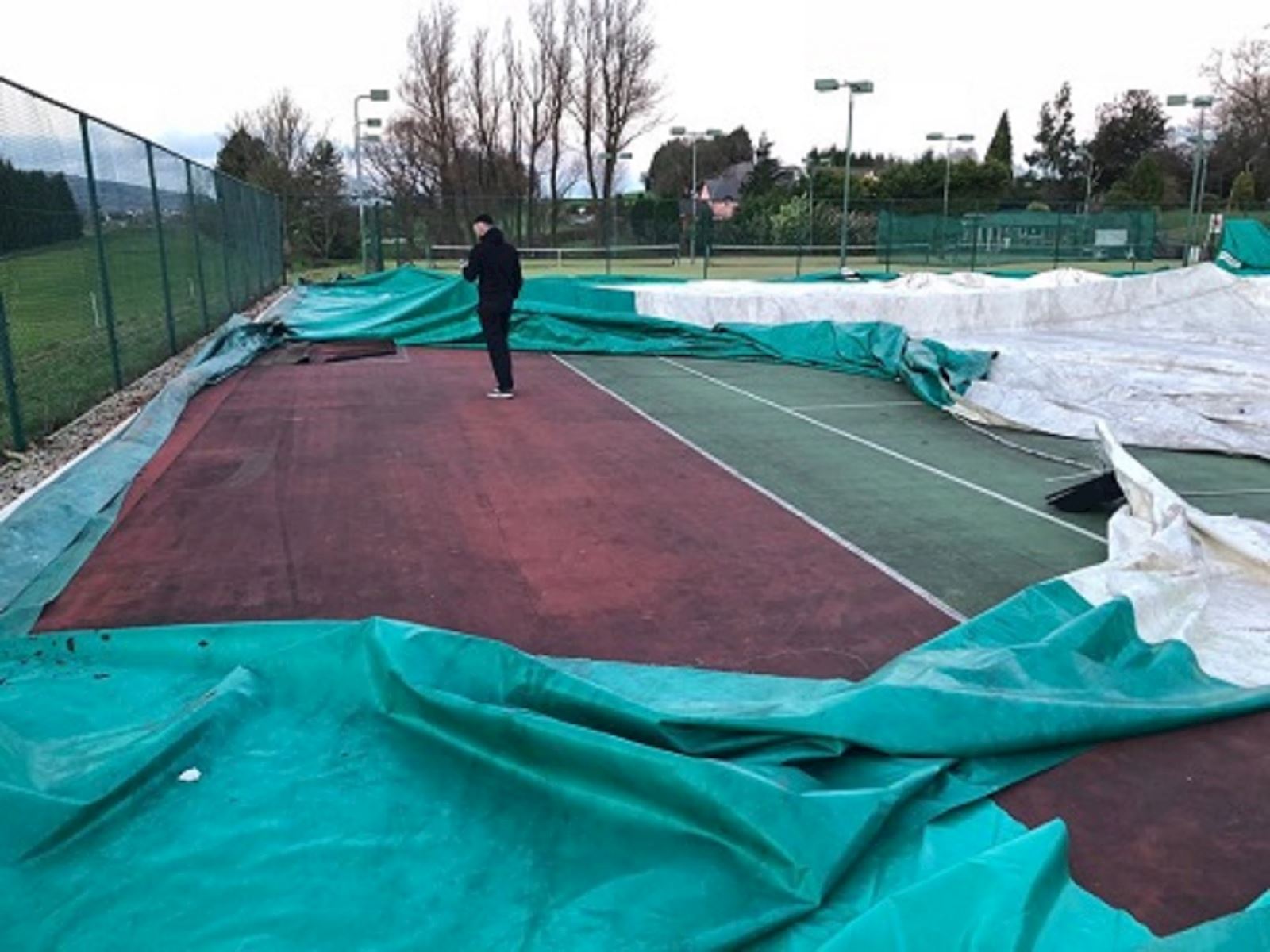 In 2019 the club is now looking to secure funding to refurbish and replace the existing courts and possibly install a new dome at some time in the future.  However this will require significant funding and money is very hard t come by these days.  Membership has fluctuated over the years and currently stands at around 100 and we are seeking new members of all ages and abilities.