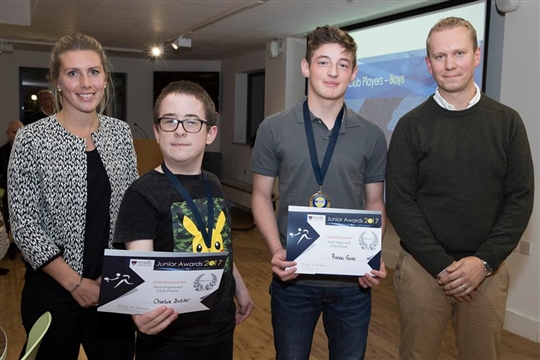 A fantastic night for Wantage TC at the 2017 Oxfordshire Junior Awards on Friday!

Charlie Butler, a player in the disability coaching programme was one of three boys winners in 'Most Improved Club Players' being described as 'has a fundamental love for tennis every week, come rain or shine which is inspiring'

Henry Brewer, a player in the junior programme pick up '12&U County Training Coaches Player' for 'Fantastic sport when competing hard but fair, which is what we like to encourage' .. looks like those early mornings are beginning to pay off!

And somehow even I got in on the act, winning the Special Achievement Award for 'Outstanding Contribution to Oxfordshire Junior Tennis' which was presented by Paralympians Marc McCaroll and Jordanne Whiley MBE'. Certainly a massive surprise and certainly should be dedicated to the people who have helped me along the way and helped mould who I am on and off court, with too many names to mention, but thank you everyone!

Big thanks to Tennis Oxford committee for a great evening and the hard work they do behind the scenes trying to improve junior tennis for the county!