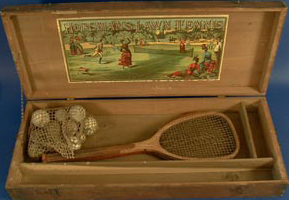 IPC, the tenant in possession of this National Playing Fields Association land, wanted the club to provide ‘cheap tennis’ for parishioners and ‘orderly access’ by membership.   The only original facilities consisted of a wooden hut.

1965:  IPC replaced its dilapidated wooden structures with a pavilion containing changing rooms and showers, which was shared by the cricket, football, hockey and tennis clubs, and a nursery playgroup.  The tennis club successfully claimed one of two meeting areas as a club room.

1966:  Iver Heath Sports Association was formed between IPC and the sports clubs.  Only tennis, football and bowls clubs now remain, and joint meetings continue to be held on a quarterly basis.  The tennis club has always maintained a good working relationship with IPC.

1972:  Permission was obtained to floodlight one court, utilising obsolete street lighting columns purchased from Bucks County Council at £5 each.  It is understood that Iver Heath was the first club in Buckinghamshire to have a floodlit outdoor court.

1974:  A proposal to utilise a spare triangle of land for a hitting wall and netted practice enclosure, with an access gate from the courts was accepted by IPC and Bucks County Council.

1975:  Planning permission was refused, to extend floodlighting to the second court, but an acceptable method of secondary lighting was found, that was installed by members in 1979.

1982: Another third court application was made, but refused because a portion of the car park was needed.  IPC did, however, purchase a 10’ strip of land on the opposite side of the courts, which gave members a cherished garden and viewing area.

1992:  In March the club room and grounds were refurbished and in April, the bold decision to hold a National (Volkswagen) Ratings Tournament at a two-court club (first in the county) with 59 entrants from 5 counties, was rewarded by sponsorship from seven local companies, raising £300 for the club.

May:  Sports pavilion and the bolws club totally destroyed by arsonists.

August: Club submitted detailed plans to IPC of different sites for new pavilions so that three tennis courts could be built on the remaining land instead of only two.  These were the basis for a project eventually agreed by South Bucks District Council and IPC, although planning permission was only granted for columns to floodlight two courts.

1993-1995:  Applications made to assist funding for three new courts and upgraded floodlights was a success.

1995: A new pavilion was built by IPC, in which the club has its own changing rooms, showers, toilets, club room, kitchen and storage.

Court construction began in November and was completed early 1996.

1996:  In March a catered lunch was provided for about 100 guests, and the official opening ceremony was performed by the late Paul Daniels and Debbie McGee.

2005:  The Club’s garden and viewing area was sold by IPC to local developer for construction of new houses.  This area had been proposed for a future Mini Tennis Court.  IPC agreed to donate £5000 and some additional land at the edge of the car park as compensation to the club to be used only for the construction of a new Mini Tennis Court and Kidzone.

2007:  The construction of the Mini Tennis Court and Kidzone was completed and officially opened on 2nd September.

2013:  Iver Heath Tennis Club starts the next sixty years off by completely refurbishing the clubhouse, underlining the Club's commitment to the long-term interests of its members and the local community.

2018: The 3 courts are re-painted blue to give the venue a completely new fresh look.  The practise wall area and kidszone is also repainted with a full size mini red court.

1996: A new pavilion was built by IPC, in which the club has its own changing rooms, showers, toilets, club room, kitchen and storage.