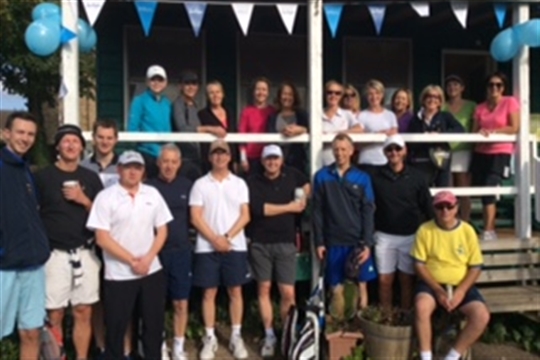 Postponed from last month, Stamford held their annual charity tennis tournament on Sunday 11th October. This year it was held in aid of Sue Ryder – Thorpe Hall, Peterborough. Although very late in the season, the day was bright and sunny, with barely a breeze, perfect for tennis! Twenty three players turned out to support the event.

After a brief warm up, match organiser Carole called all the players together to get the tournament underway. The morning was played as an ‘American’ tournament. Players were divided into two groups, blue and pink, and then given a number. Court allocation and partners were then drawn at random for every round, each round lasted an average of 22 minutes. Players played regular games and at the end of each timed round every player gave their ‘games won’ score to Carole. With fresh court and partners drawn for each round there was plenty of opportunity to play with and against a large variety of different players at the club.

The point of the day was to raise money for Sue Ryder and play lots of good friendly and social tennis matches too but, for the record, the top scorers were Robert Mowatt (Blue) and Lottie Butler (Pink).  Each received a can of new balls for their efforts.

Head of the club’s Social Committee Maggie Knight had done a tremendous job of laying on a buffet lunch, with the club making a donation and several members bringing food and drinks for the buffet in addition to their entry fee. As always the food was delicious and plentiful.

A good time was had by all the players, entry fees, raffle takings and an additional donation by one of our members combined to raise a total of £472 for Sue Ryder – Thorpe Hall.