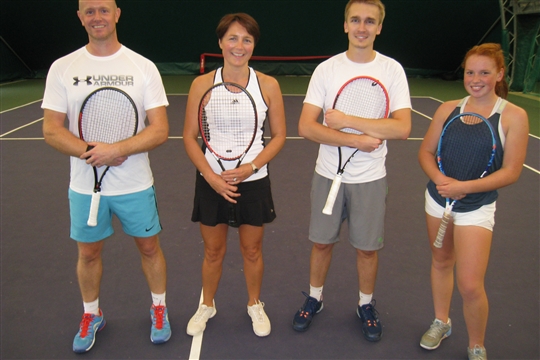 Huntingdon regained the Don Brace Cup defeating our 3 year reign as champions by 5 sets to 3 on Sunday 1st October at the indoor courts at the City of Peterborough Tennis Club. In an extremely hard fought encounter, it was Huntingdon's 2nd Mixed pairing of Tristan Bacon and Lydia Sivirentsava who wrenched the title from Stamford, defeating Martin Trawford and Lottie Buttler 7 - 5, 6 -2 in their mixed match. Huntingdon's 1st Mixed pairing of MIchael KIng and Natasha Scott drew their match against Stamford's Alex Smith and Pippa Bourne 6 - 1, 4 - 6.

Huntingdon's Michael King and Tristan Bacon drew their men's match against Stamford's Alex Smith and Martin Trawford in a hard hitting encounter. With Huntingdon winning the first set comfortably 6 - 1, Stamford clawed their way back into the tie winning the second set 6 - 3. It was then left to Huntingdon's ladies pairing of Natasha Scott and Lydia Sivirentsava to win at least one set to regain the trophy they last won in 2013. They relieved the pressure by winning the first set against Pippa Bourne and Lottie Buttler 6 - 3 to seal the win for Huntingdon. Stamford ladies won the second set 6 - 4 to end an extremely tight encounter between two closely matched teams.