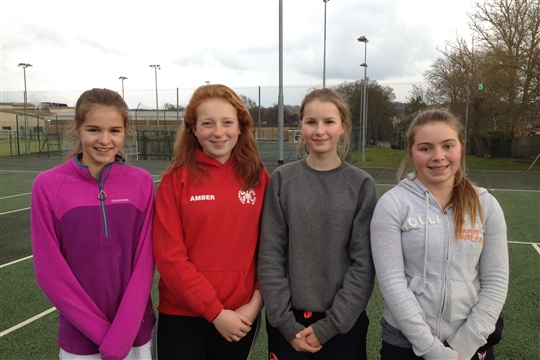 Fast 4 Tennis started in Australia two years ago but has now been adopted as a recognised format by the LTA and other tennis governing bodies around the world. It is designed to reduce the length of individual matches, meaning that players in competition (and the parents who take them there) don't have to commit so much time when entering events. Further details on this new format can be found at the end of this report.

Amber, Sophie, Evie and Annabel all took part in this, the last STC Junior event of the winter season. The weather also played a part: we had 3 seasons in one day: rain, sunshine and even snow! The girls played a round robin tournament where they each played every other player.

In the first round Amber played Sophie, Evie was against Annabel. Evie and Annabel had a good close match with Annabel eventually winning 4-2, 4-3. Amber's win was a little more one sided, 4-0, 4-1 but with Sophie arriving hot foot from a Pony Club competition and having to start after a brief knock up, it took Sophie a few games to get into the match and by then Amber was too far ahead.

Round 2 produced two very close matches, Sophie playing Annabel, Amber playing Evie. Sophie had now got going and she is a very determined competitor, chasing every shot down and occasionally catching out her opponent by getting her to play yet one more shot. In a long and close match Sophie finally came out the winner, 4-2, 3-4, 10-3. In what was to prove Amber's toughest match, both sets went to tiebreakers, though Amber took both to beat Evie 4-3, 4-3.

In the final round Amber played Annabel and Evie took on Sophie. Playing through occasional snow flurries, Amber completed her hat trick with a 4-0, 4-3 win. Evie and Sophie had a long and tough match before Evie closed out the victory 12-10 in the third set.

Amber finished top, the others equal second on one win.

There are four main changes to the standard rules we all know:

Tournament Referees can also decide whether a match is to comprise of one set or best of three sets and if best of three whether the third 'set' is the same as sets one and two or to just be a Match tiebreak to 10.