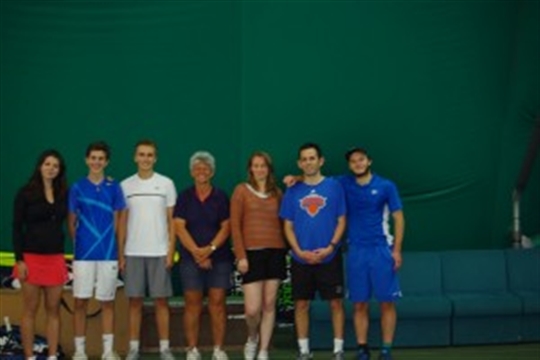 Sunday 4th October saw our Don Brace team head to Huntingdon Indoor Tennis Centre to play the final of the Don Brace Cup, This Hunts and Peterborough league tournament is unusual in that a match consists of both mixed and level doubles. Each team has two men and two women in it. The first round comprises of two mixed doubles matches, each of two sets. For the second round, those pairings split to become a mens doubles and a ladies doubles pair for two more sets. The team that wins the most sets wins. If sets are tied at 4-4 the, total games won decides. If also a draw at games level then the ladies play a championship tie-break (to 10) to decide the outcome. Both teams had tough matches in previous rounds, indeed Needingworth triumphed against final hosts Huntingdon on games count back, winning by the small margin of three games difference (37 to 34).

Felix and Carole had a good match before coming through 6-2, 6-2 against Simon and Laura, however the match of the final was the surely the ‘first’ mixed, where Alex and Sophie were against Michael and Aislinn. This was mixed doubles at it’s best with power, pace, touch and court craft on show from all four players, In a very even and very long first set it went to the tie-break, Michael and Aislinn raced ahead to a 3-0 lead before Alex and Sophie completely turned it around, winning the next seven points in a row to take the set. Alex and Sophie continued their excellent run to take a two love lead in the second set before Michael and Aislinn came back to claim the second set 6-3 and tie the rubber at 1 set all. At the end of the first round Stamford were therefore ahead 3 sets to 1 at the start of the level doubles.

Sophie and Carole got off to a good start in the ladies doubles where, after a very tight initial four games at the start of the first set, they ran away with it, 6-2. Alex and Felix on the other hand came up against a fiercely determined Michael and Simon and lost the first set 2-6. Two sets into the second round and the overall sets score was now 4-2 in Stamford’s favour.

Sophie and Carole’s second set followed the same pattern as their first set, and they took the set 6-2. On the other court the mens second set was a much closer affair, going right through to the tie break. Hemingford’s men knew by this point that the final was lost but still they kept the pressure on Stamford and battled hard to take the second set tie break and win the mens doubles match.

Stamford therefore won the final  5 sets to 3 and successfully defended the title they won for the first time last year. Although unable to play in the final, Team Captain Martin Trawford also deserves an honourable mention, having taken care of all the organisation and also playing in all the previous rounds, thus playing his part in ensuring we qualified for the final.