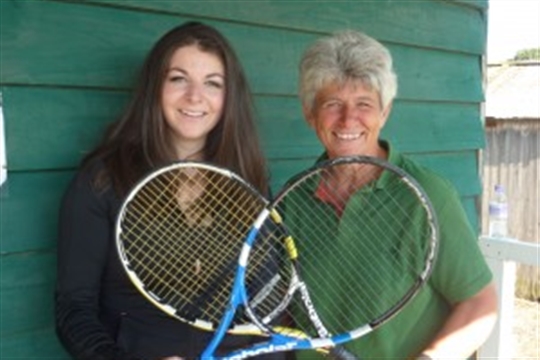 Sunday 6th September saw the culmination of the club championships with 7 events (6 finals and a round robin) being held in glorious sunshine throughout the day.

The Men’s and Ladies Singles reports are below. For Adult Doubles Reports and Junior Reports please see their separate news posts.

The Men’s Singles Final saw defending champion Alex Smith play Felix Beech. This match was a game of the highest caliber between two fairly evenly matched players. The vast majority of the rallies were long and hard fought with both players using the full depth and width of the court to try and gain an advantage. Alex took the first set, then Felix fought back to level the match at one set all. Felix looked to be the favourite as he took a 5-4 lead in the decider but Alex dug in and took the third set all the way to the tie-break. Felix got off to a great start, getting 6-2 ahead before Alex came back at him again to take the third set and the match, 9-7. This was a great match to watch, momentum switching back and forth several times from one player to the other throughout it’s two and a half hours duration.

The Ladies Singles Final saw last year’s champion, Sophie Walker, play against Head Coach Carole Wilson. It was a match with two players of different styles, Sophie: the big hitting aggressive top spinner, Carole: the counter punching slicer. Tactics were key for both players, each trying to make best use of their own skill set and prevent their opponent using their best weapons. Carole shot off to a 3-0 lead before Sophie came right back to win the next four games back to back. In a long and key game Carole eventually broke Sophie’s serve to level at 4-4, Carole then kept the momentum , taking the set 6-4. Sophie came out very strongly at the start of the second set, serving particularly well, and Carole seemed to have forgotten the game plan that had enabled her to win the first set, instead she was trying to outhit Sophie baseline to baseline. Sophie was soon ahead 4-1 in the set! Fortunately for Carole, she seemed to realise the error of her ways and she went back to her earlier game plan of slicing low and deep, mixed with drop shots here and there. Several very close games followed, then Carole just edged ahead, taking the second set and the match 6-4, 6-4.

These two finals were great to watch and there was a good crowd of members down to spectate, all adding to a great atmosphere!