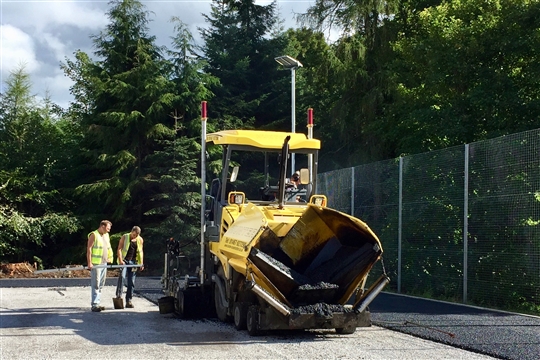 In October 2015 the club launched a major project to renew its badly crumbling 32 years old concrete courts, which were also being uplifted and cracked by the enormous Douglas Fir trees on two sides.  The scope included replacement of the existing obsolete floodlighting on two courts (providing lots of glare but insufficient illumination for playing tennis), with state of the art low power, high quality tennis specific LED floodlights for all four courts.

A huge task lay ahead, with the club needing to raise at least £25,000 over 24 months in order to double its funds to provide £50,000 towards the costs.  Tremendous enthusiasm from club members and supporters alike saw a fantastic range of club fund raising activities, as well as individual sponsored events and the target was hit almost two years to the day after starting!  Fabulous and much welcomed grants of £50,000 each from sportscotland (National Lottery) and WREN Landfill Community Trust and £10,000 each from Tennis Scotland (LTA) and EB Scotland Landfill Community Trust, showed confidence in the club and what we were planning and provided the further £120,000 needed to go ahead with the £170,000 project.

Project execution took place between July and October 2017.  Firstly a new upgraded power supply for the new floodlights was installed by SSE, supported by local electrician SR Davidson. The troublesome trees were then safely and rapidly removed by local company Craig Nicoll Timber (they will be replaced in 2018 by twice as many smaller native deciduous trees, planted much further away from the courts).  Inverurie based Hunter Construction undertook the main project scope, laying new porous tarmacadam courts on a sub-base of aggregate, formed mainly of broken up concrete from the old courts. Finally the new LED floodlighting was installed on all four courts by Halliday Electrical. The courts were fully re-opened for play on 8th October.

Achieving this in just two years is a remarkable achievement, made possible by many people.

The story is brought to life in this short video - we hope you enjoy it.