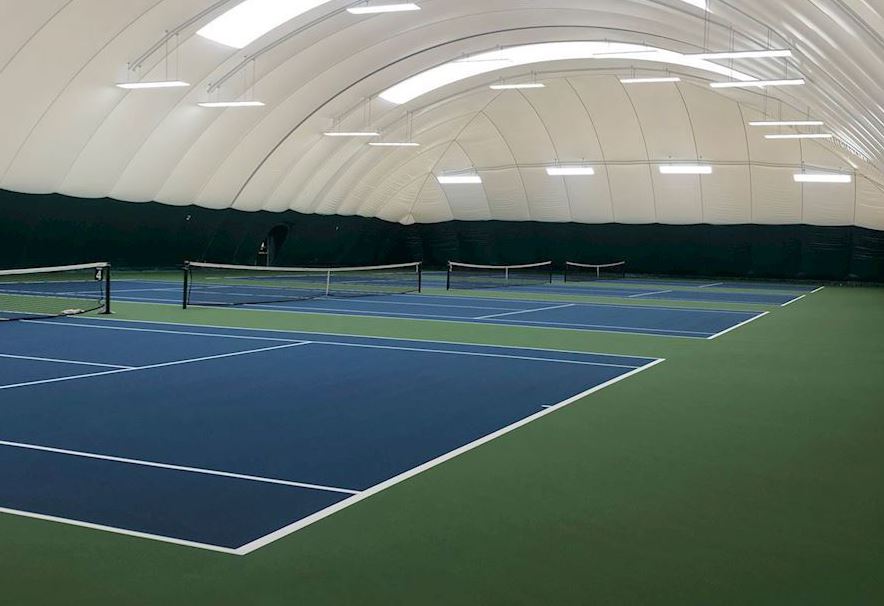 Corby Tennis Centre has undergone a major refurbishment, and must now be considered one of the leading indoor Tennis venues across the country. In addition to the new air halls and fantastic LED lighting, the courts have now been resurfaced by Plexipave. The team doing the courts have been working on the facility at the All England Lawn Tennis Club at Wimbledon, as well as the LTA National Tennis Centre at Roehampton, and will finish putting the lines down at Corby on Monday 13th September.

This summer has been a particularly successful one for the tennis centre, as they have won most of the team tennis events they have taken part in.  For the first time, they had a ladies team taking part in Northants Division 1, captained by Gee Farnsworth. It was a strong squad, including players like Sophie Walker, Fiona Frost, Othelia Stallbom, Deborah Powell, Alexandra Manilovic, Anca Hollingsworth & Iryna Zahedi, and the ladies won every match to win the league. This was mirrored by the Corby Mens 1st Team, who also won the Division 1 title. The team was helped by the emergence of Jakob Bonnett who comfortably held his own at the top level and new addition Andy Palliser, alongside regulars of Kyle Rae, Alan Jordan, & Matt Richmond. The team was hugely helped with the appearances of Jack Haworth and Joe Tyler when playing the best local opposition of County A and Northampton A, who they beat 6-2 and 7-1 respectively.

In the East Northants leagues, the Ladies 1st team captained by Ruth Morecombe, the Mixed 1st Team captained by Wendy Brown & Gavin Potter, were both victorious, and the Mens B team won promotion from Division 2 to 1 next
year.

It is purely coincidence that the new indoor courts are the exact same colour as the US Open courts, which saw such an amazing 2 weeks of results for British Tennis. As well as Emma Radacanu winning the ladies singles, we had success in Joe Salisbury winning the Mens Doubles and Mixed Doubles finals, as well as a number of victories in the wheelchair tennis events. Corby Tennis Centre Manager Craig Haworth had this to say – “I am delighted with how the courts have turned out. It has been a huge struggle for many venues to stay open during this past 18 months, but with the support from our Members and the public, and the graft that my wife Juliette has put in behind the scenes, we have been able to not only stay open, but to improve our facilities to an amazing extent. We are a small Community Interest Company, so to have been able to put the funds together for such a major refurbishment is a great achievement, and a credit to our Directors, Karyn Slatter and Tim Davies who have helped so much. The indoor courts are absolutely fabulous. I was delighted to be able to invite many of our team captains and squad players along to open the courts yesterday, and have a game. We have an incredible number of top events taking part here this winter, and have all 8 indoor courts booked for events every weekend day until the end of April. This weekend we have LTA National Training, then the following weekend it's the 4 Nations Championships, where teams from all four countries send around 20 of their top juniors for a full weekend of competition. We also have the LTA British Tour Event in February, as well as the 12 Counties Champs and veterans events that I run. Our coaching programme is absolutely buzzing at the moment, and I am hoping that Emma’s incredible result will see even more youngsters, especially girls looking to take the sport up, and now they can do it locally, at one of the leading tennis venues in the country.”