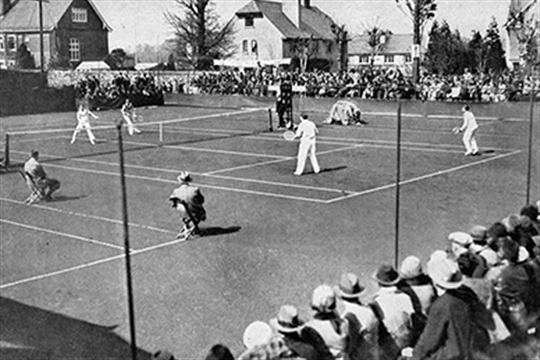 Hill Lane Junior Tennis Club was formed on the Hill Lane site in 1949 by B Hamilton Whiteford, a local solicitor, after he was inspired to create a club exclusively for Juniors, from watching Junior birthday parties held at neighbouring Carhullen Tennis Club.

The club was inaugurated for young players under the age of eighteen years to be run by themselves. As far as it is possible to confirm, world wide, no other such arrangement existed then or now, whereby juniors organised their own club activities with an elected junior committee. No adult, other than Mr Whiteford was permitted to enter the grounds, other then to collect their children (this was restricted to the entrance) with the exception of the club Tournament Finals and the Plymouth Senior Championships.

One of the Juniors to inspire B Hamilton Whiteford was Angela Mortimer.  Angela Mortimer was World no1 in 1961, the year she also won Wimbledon.  She won 3 other Grand Slam titles, despite suffering from a severe tropical illness for 2 years at the height of her game, and being partially deaf, and spent 9 years in the World Top 10.  Angela's road to the top started here when she won her first silverware, the Carhullen Challenge Vase in 1948, for winning the Plymouth Schools Girls Doubles title.

The club has went on to produce Junior Wimbledon Champions in the Girls Doubles (Janet Scobie & Julia Gilkerson) and Girls Singles (Nuala Dwyer) and has a host of noticeable past members from all walks of life including Michael Ball, Britain's leading musical star who enjoyed the Hill Lane Disco's in the 70's.

The Carhullen Tennis Club site was adopted into Hill Lane in 1996, and tennis has been played here since 1926.  In 1931 it hosted GB's first round Davis Cup match vs Monaco which GB won 5v0 with the GB team being led by Fred Perry (picture above supplied by Chris Robinson).

Unfortunately the Club went through a difficult spell and was effectively rescued by a new commitee in 2008. By this time membership had dwindled and things looked decidely uncertain for the future. However the new commitee set about turning things around. The club merged with Russel Avenue Tennis Club in 2009 and the sale of the Russel Avenue site brought in much needed funds.  A Tennis Coaching company was appointed and soon the courts were back in use.

By 2010 it was apparent that we needed our own dedicated Coaching Team and John and Glenn were appointed as Club Coaches. They bought with them an enthusiasm for Mini and Junior tennis which soon had a positive impact upon the Club and attracted new members both Juniors and Seniors.

Hill Lane Tennis Club is once again transforming into the best junior and adult club in the Plymouth area and with the backing of the committee and coaching team is now the largest non commercial club in Plymouth.