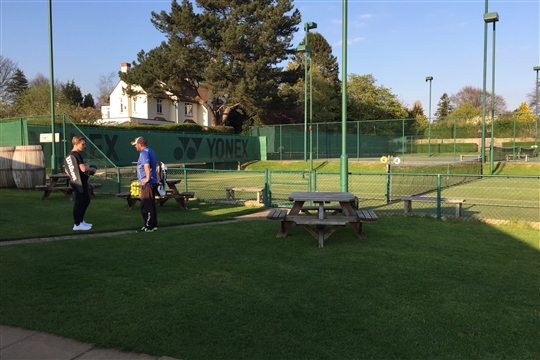 Laura Mineards is LTA level 4 qualified. In addition to this, Laura has a BSc Sports and Exercise Science Degree.

Laurahas a full LTA license, which demonstrates that he is appropriately qualified, DBS checked, First Aid trained, safeguarding and protection in tennis trained and committed to continual professional development, which means he can offer a guarantee to all parents, players and clubs.

Laura has now been coaching full time for 4 years and predominantly works within our junior development and performance programme. In addition to this she heads up our Tots Tennis programme and delivers our Adult Beginner sessions.

Laura has brought Cardio Tennis to the club which is a fun based tennis workout session and is open to total beginners to experienced tennis players.

Laura is also the clubs tournament organiser and runs various tournaments throughout the year.

Laura enjoys working with all ages and abilities, her individual coaching rate is £25 per hour.

Steve has a full LTA license, which demonstrates that he is appropriately qualified, DBS checked, First Aid trained, safeguarding and protection in tennis trained and committed to continual professional development, which means he can offer a guarantee to all parents, players and clubs.

Steve has over 20 years coaching experience.  He began his career at Corby Indoor Tennis Centre and progressed to become the Universal Tennis Academy Head Coach in 1998.  In addition to this, he was appointed County 13 & Under Girls Manager and was also heavily involved in the County Training Programme.

In 2000, Steve took the opportunity to coach out in Australia and took on the role of Head Tennis Professional at Ferny Hills Tennis Centre in Brisbane where he worked with several highly ranked state juniors. In March 2003, Steve returned to the UK to become a Director of Northants Universal Tennis Academy. From 2004 to 2022, Steve has been Head Coach at Northampton County LTC.

Steve is also the County Age Group Manager for the 9&U Boys, Girls and 14&U Boys.

Steve’s on court work is predominantly with performance juniors. His individual coaching rate is £25 per hour.

Cameron Yuill is a level 3 LTA Accredited Tennis Coach, with appropriate First Aid, DBS and Safeguarding qualifications. In addition to his tennis qualifications, Cameron has a Masters’ degree in Sport and Exercise Science alongside several Personal Training qualifications.

Cameron has over 5 years tennis coaching experience with players of all ages & abilities and works with groups, individuals and schools. He has 4+  years’ experiencedesigning and implementing individual & group strength & conditioning programs/sessions and offers individual 'performance Strength & Conditioning' sessions and 'injury prevention screens' to juniors and adults interested in maximising their performance and longevity on court.

As a junior, Cameron has enjoyed many years competing at the highest levels during which he achieved a top 10 UK national ranking, represented East Midlands and represented both Northamptonshire and Nottinghamshire County Teams. Cameron has been trained and mentored by some of the best coaches available and has had the privilege to train at some of the best facilities (including Roehampton NTC, Loughborough NTC and Batchwood HPC).

Cameron’s Tennis Coaching and Strength & Conditioning rate is £25 per hour.

As a professional player, Mark had a world ranking of 660 and a GB ranking of 11. He has represented Great Britain nationally at 18 & under level and 35 & over level. Mark has also represented England at senior level.

Mark has undertaken county coaching for Northamptonshire, Oxfordshire and Bedfordshire. In addition to this, he coaches at Oundle and Rugby Schools.