If you know your history... 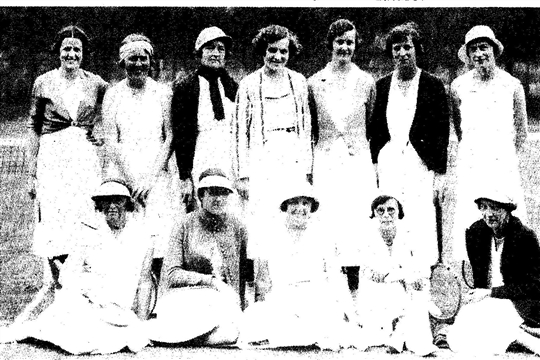 Records of tennis in Royston go back as far as 1914 when members played at Heathlands Tennis Club for a subscription of 10 shillings and 6 pence and visitors played for 2 shillings a week.

Tennis, along with other sporting activities, was put in abeyance whilst we dealt with the Boche in The Great War, but thereafter formal clubs were resuscitated and there are records of both Heathlands Tennis Club and Garden Walk Tennis Club playing competitive matches in 1919.

Garden Walk Tennis Club became the main venue for tennis in Royston and the club would later become Royston Tennis Club. In 1920 the subscription was raised to £1 and a new pavillion which was purchased in 1928 cost £21. The picture on this page shows Royston ladies from the 1920's competing for the Nursing Association Ladies' Doubles American Tennis Tournament (Challenge Cup).

The 1950s were an uncertain time for the club. Having been given, and turned down, the opportunity to purchase the Garden Walk ground in 1953 they were given notice to quit the site the following year. The club resisted this until 1964 when it finally give up the Garden Walk site, but in the meantime membership had fallen.

Members played on the Priory courts for four years up until the Heath project was completed in 1969, whereupon membership rose to 80 plus some juniors. In 1977 the club first won its major silverware in the form of the Grays Cup and by the 1980s membership had risen to over 100 juniors.

In the 1990s the courts at Royston Heath began to fall into disrepair and with significant funds required to restore them into playable condition the club migrated to play at Meridian School. During the X years that the club was at Meridian the coaching infrastructure was rebuilt and a junior programme developed sufficient to qualify the club for the LTA funding necessary to redevelop the courts at The Heath.

In November 2010 the club moved back to The Heath and the six quality floodlit court facility that it now enjoys. Since returning to its spiritual home the club has continued to grow both in terms of coaching, membership numbers and team success, culminating in Royston Tennis Club winning the Grays Cup for the first time in over 35 years and then retaining it for an unprecedented hattrick of trophies between 2012 and 2014.

A proud history and solid foundations on which to build for the future.