As a junior Justin trained in Cambridge and represented the county from under 8’s all the way through to seniors. He studied A levels at Hills Road Sixth Form College, whilst training on the national U18 boys squad. He spent four years playing professionally from 1998 to 2002, rising to British no.8, with a best ATP world ranking of 411.  He went on to be company director and head coach at Compete Tennis, a high performance centre in London.

Justin is a highly talented and inspirational coach. His true love of the game shines through with enthusiasm, making tennis enjoyable for all. He’s equally interested in helping complete beginners, social players and those wanting to compete at the highest levels. He will help you to build confidence, improve your shots, read the game, apply strategies and clever tricks.  Whatever your aims, Justin will help you achieve your goals.

Andy Lingley is a DCA tennis coach and has LTA accreditation. He started coaching in April 1997 at the Long Road Tennis Centre and has coached at the Cocks and Hens since April 2005. Andy has coached a broad range of abilities and ages from 2 years to 90 years, from complete beginners to internationally ranked 18 & under juniors, and every ability in-between. Andy coaches a number of groups at the Cocks and Hens and is also available for individual lessons. Added to this he is a UKRSA qualified racquet stringer. Andy takes a pupil-centred approach to coaching responding to individual need and ability.

Charles Harcourt is a qualified PTR (Professional Tennis Registry) coach in their 10 and under and 11-17 years categories. After gaining this status he began work in 1997 at Cambridge Lawn Tennis Club and in 1999 squad coaching at Hills Road Tennis Centre, where he still spends some of his working hours. Since 2006 each year Charles updates his coaching knowledge at the PTR Symposium in South Carolina USA, sharing and learning new coaching concepts and ideas with coaches from all around the world. Charles is also a Christians in Sport summer camps coaching team member and part of the Perse Upper School sports staff, coaching the tennis teams and other racket sports. He joined the Cocks and Hens Tennis Club coaching team in September 2011 and as can be seen by all the areas of success he has had across many ventures, he is an excellent coach with great tennis knowledge and has a very welcoming and approachable personality. 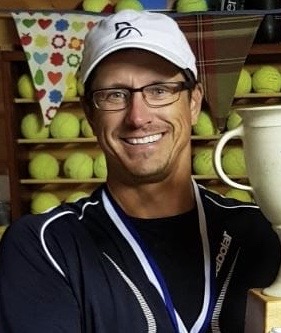 Neil O’Donohue is a LTA Accreditation+ Tennis Coach. Prior to becoming a tennis coach full time, Neil was a Head of Physical Education, specialising in Tennis and Football (UEFA ‘B’ Licence). He also qualified as a Physiotherapist in 2009.

Neil has over 25 years coaching experience and has been full time in tennis for almost a decade. He works with all ages and abilities.

Neil is a UKRSA trained Racket Stringer and a Cardio Tennis instructor.