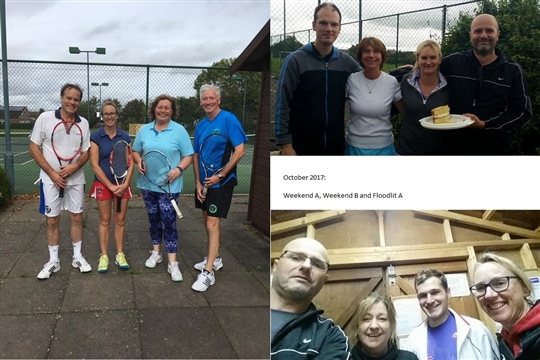 The first matches of the winter season have now been played – and all 4 teams had a match in the space of 11 days (1st to 11th Oct).

In a quirk of scheduling, all 4 teams started off with a home match, with Floodlit A and B playing Brackley A and B; whilst Weekend A and B played Tysoe A and B.

3 of our four teams had been promoted at the end of last winter, so we were really pleased to win 3 out of the 4 matches.

The first match was Weekend A (Debs, Helen, Nigel and Colin) vs Tysoe A – this was a very close match, but the visitors just edged it 5-3. The performance of the day was Debs and Helen, who having found themselves 0-5 down in the first set, stormed back to take the next 13 games for a 7-5 6-0 win.

Next was the turn of Floodit B (Nigel, Olly, Eira and Helen) vs. Brackley B.  Brackley B had also earned promotion last season.  The weather had quite an impact on the evening as the wind got progressively stronger, and didn't come consistently from the same direction. Whilst the Harbury team were used to the conditions, the Brackley team struggled more with the ball suddenly not being where they expected it to be! All the matches were competitive but, through a combination of skill and better adjustment to the conditions, Harbury came out top in every match winning the tie 8-0. We should enjoy the sight of Harbury B currently being top of the league as we may not be there for long!

Weekend B (Joe, Florence, Tamsin and Steve) were up next – against Tysoe B this time.  Tamsin and Florence were both making their winter league debut, and the team ended up with a 5-3 win over the visitors.

And finally, Floodlit A (Steve, Clare, Ben and Debs) vs. Brackley A.
The ladies lost their 2 sets (first time they had played together, and Clare's first match for Harbury). They then had to wait in the wind for Ben and Steve to split their sets (both on tie breaks). In the mixed rubbers, Steve and Clare (2nd pair) won their 2 sets, and then sat back to watch the quick and furious rallies of Ben and Debs final points as they won the 2nd set tie break, clinching the match for Harbury 5-3.

Over all, an excellent start to the season.

The Floodlit matches continue next week on Wed (B vs Banbury) and Thurs (A v Kings Sutton B).  The weekend teams then both travel to Tysoe.