Harbury B go Top of the League 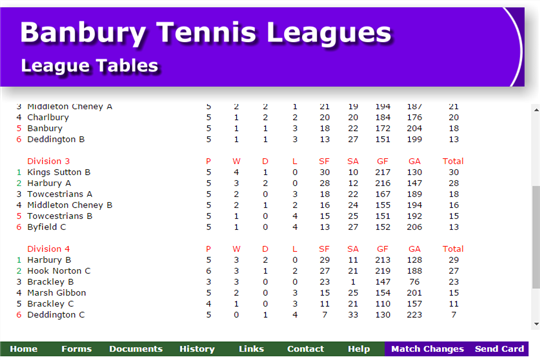 The New Year has started with a bang as Harbury B took on Hook Norton C who were sitting top of the league.

The team line up of Josh Marshall, Olly Wiltshire, Sue Panton and super sub Karen Bristow started the match strong by winning both the men's and ladies pairing to take an early 4-0 lead.

The mixed pairing of Sue and Josh were in devastating form and strolled to a 6-1 and 6-2 win to ensure the match was won.

The other pairing of Olly and Karen had a slightly tougher couple of sets. Hook Norton stormed to a first set win 3-6 but as the evening went on the strength and stamina of Olly and Karen proved too much. An almost perfect set finished out the match with a 6-1 win.

Overall score was 7-1 putting Harbury B top of Division 4.

We will need to watch out for Brackley B as they seem on a roll and with only six points behind and two games in hand the match against them will be pivotal.