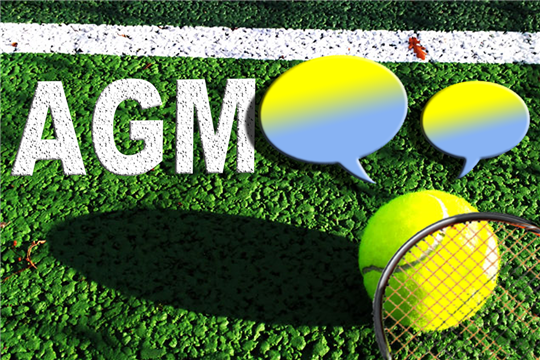 Evening began with a lasagne supper

Minutes of the 2018 AGM were accepted as a true record of that meeting. Proposed by Joanne Coombs
seconded by Sue Whitty

Matters Arising from the Minutes:
Ann was able to report that following last years AGM:
• The issue with smell from the ditch by the courts is in hand with the environment agency and a new sewage treatment plant is being installed. Members to let Committee know if they notice any future problems with smells from the ditch.
• The trees surrounding the courts have been cut back by the Parish Council and Jonathan Lucas has sorted the Ash tree.
• After speaking with the Cricket Club it was decided that use of their car park was impractical for club sessions.

Chairman's report:
• Membership down again slightly, more single adults and less family.
• Courts are playing well have been well used, with great weather this year. Good to see several groups playing regularly.
• Tues/Fri group organised through email 6 weeks in advance, Thanks to Jo for organising this. Mon/Wed eve groups very well supported and thanks to Lawrence for organising this. Also some Sat men’s tennis and several American Tournaments.
• Club to try to set up automatic reminders for subscribing to the Wimbledon Ballot both with the LTA and our club ballot. Thanks to Ann for the organisation of this.
• Moss clearance has been undertaken and courts had to be closed at short notice. Mike asked that all members bear with the • Committee having to close courts on occasion for maintenance but timing is governed by availability of both companies involved and those who volunteer.
• Alan offered to get a quote from his court maintenance contractor as he washes before treatment. Court resurfacing due 2021/22, Alan recommended that we look at possibly repainting the courts then as they should be able to last longer before resurfacing. Thanks to all those who have been clearing leaves.
• Thanks also to John Browning for mending the notice board.
• Ann has liaised with BBHPC and the new lease is ready to be signed taking us to 2029.
• All is working well with the website. Possibly update photos with junior/family/student to try to broaden
membership.
• Non member bookings down.
• Feedback on the new path is good. Volunteers to help spread rest of bark wanted, an email to go out for early December. Alan offered to use his Kawasaki Mule to speed up the process. It was suggested that we look at putting hardcore in the lay-by on court side of Byfleets Lane and posts with chain to stop dumping of barkchip and vans parking. Ann to write to the PC.
• Had a successful quiz and it was decided to do another early next year. Mike Doran offered to be quiz master again. Same format but with teams paying in advance.
• Nigel Matthews to remain on website as a coach.
• It was decided not to worry too much about Facebook as a poll of members showed that few use it.
• Peter raised the issue of lorries passing the courts to Field Place, it was agreed there is nothing more we can do about that.

Treasurer’s report:
• Club on track for future maintenance costs, feels there is no need at present to increase subs.
• Thanks were given to the auditor and Tim.
• Report was accepted. Proposed Paul Singleton Seconded by Sue Whitty
• Election of the Executive Committee:
• Mike was happy to remain in his role as Chair, Proposed by Micheal Heeley seconded by Sue Whitty
• Ann was happy to continue as Secretary, proposed Alan McLean seconded by Jackie Calway
• Tim was happy to remain in office as Treasurer, proposed by Sue Whitty , seconded by Paul Singleton
• All other committee members happy to remain.
• Ann asked if there was anyone present who would like to join committee but nobody wished to at this time.
• Special thanks were made to Keith Beaney for all his ongoing work with the website.

Ideas and suggestions from the floor:
• Floodlights - Mike, Ann and Alan have undertaken research into the possibility of this. Alan has set up a
survey with a supplier to discuss possibility and costs of supply. Also has some knowledge on lights and Ann has info from Barns Green who have just installed lights. Next step to research planning and Mike to speak to Roger White who may be able to assist. Cost at present estimated at approx £10,000, thought we may be able to fundraise some and use some from funds. Committee to follow up
• Ann reported that she had received an email from a London charity offering to help with a grant and training for a defibrillator. This would still cost in the region of £1500 and although Cricket Club have said they may contribute it was decided at this point to wait due to cost plus the possibility of vandalism as it would be on the outside wall of the Cricket Club
• A maintenance group working on areas near the courts have asked for any volunteers on Thursday for a tidy up.
• Screens - Paul has researched screens that would allow air through thus not causing so many problems with the fencing. The opinion of the meeting was not to bother at the moment, nobody present felt there was any issue without screens.
• Roger suggested we replace the mat, this was agreed.

Evening began with a lasagne supper

Minutes of the 2017 AGM were accepted as a true record of that meeting. Proposed by Michael Heeley seconded by Sue Whitty

Matters Arising from the Minutes:

Ann was able to report that following last years AGM

- floodlight possibility to be discussed later in the meeting

- membership fees were raised as agreed and guest fees reduced

Chairman's report: A copy of the report is attached in the file separately.

Courts have been well used, with great weather this year. Courts were repainted and have new posts and nets.

Next big expenditure should be resurfacing in approx 2021/22

New website, GDPR compliant. Includes booking and renewals. Looking at online payments and possible non-member booking. Special thanks to Keith Beaney for his help and advice and committee to give him voucher as a thank you.

New path installed from lay-by to courts. Contributions from BBH and Warnham PCs plus funds raised from quiz. Special thanks to David Bridges for all his help in making this happen. Club donated £100 to Butterfly

Project as thank you. Also thanks to all those who came to spread bark.

Successful quiz again in January with Annabel and Mark McCord as quiz masters. Another to be held in Feb 2019, Mike Doran has offered to be quizmaster.

May Wimbledon draw event was well attended with again 6 pairs of tickets.

No formalised coaching this year, Nigel Matthews on website for those who may wish to organise their own. Alan McLean suggested another coach, committee to follow this up.

Whatsapp has been used for Men's sessions, could perhaps be trialled for others.

Mike ended his report with a thank you to all the committee and especially to Tim as treasurer, Peter for his efforts as Membership Secretary and to Ann for all the extra work in preparing the safeguarding and diversity policies.

Treasurer’s report: A copy of the report is attached in the file separately.

Increase in subscription revenue - up 35%, Club on track for future maintenance costs.

Thanks were given to the auditor and Tim.

Election of the Executive Committee:

Mike was happy to remain in his role as Chair, Proposed by Ann Lines seconded by Sue Whitty

Tim was happy to remain in office as Treasurer, proposed by Mike Coombs , seconded by Jo Waddingham

All other committee members happy to remain.

Ann asked if there was anyone present who would like to join committee but nobody wished to at this time.

Ideas and suggestions from the floor:

• The smell from waste in the ditch to the north of the courts was raised. Joanne had spoken to a homeowner opposite the courts but the problem continues. Ann to pursue this matter.

• Leaf blowing - it was discussed as to whether there was any possibility of having the leaf blower secured somewhere near the courts for members to use. It was decided that this wasn’t practical. Peter to continue to keep the blower as he is regularly at courts and happy to blow them. Others present have their own and are happy to bring those on odd occasions during the autumn.

• Trees - an ash to the north of the courts has been condemned by BBHPC/Connick Tree Care. It is on land owned by Jonathan Lucas. BBHPC have contacted him but nothing yet happened. BBHPC have taped off that area and we have put up a notice to warn members. Ann to follow up with BBHPC and Jonathan Lucas.

• It was suggested that the Club approach the cricket club about the possibility of being able to park in the car park by the Club house as with the field being now used for football too, parking is difficult at times.

• Floodlights - there is interest among members to explore the possibility of floodlights. Ann reported that funding from LTA would not be possible at present but Mike suggested Biffa May be a possibility. It was agreed that there would be a sub committee to research the possibilities - Lawrence McGraghan, Alan McLean and Paul Cox.

• Marketing - discussion was had about possible ways forward with marketing but it was decided to continue as we have been at present. Alan McLean offered sponsorship for a banner, committee will liaise.

Ann proposed thanks to Mike as Chairman

The evening began with a lasagne supper

These were accepted as a true record of that meeting. Proposed by Joanne Coombs, seconded by Michael Heeley

Matters Arising from the Minutes:

Dave Almond added as replacement coach to Michelle on Website but has since left coaching.

Mike ended his report with a thank you to all the committee and received thanks for his efforts as Chairman from the floor.

Thanks were given to the auditor and Tim.

Election of the Executive Committee:

of thanks for his long and dedicated service on committee from all those present.

Ideas and suggestions from the floor:

• Sue suggested we purchase a new banner, before this is done Nick to check details on one that is stored.

wood chip path through the wood to the courts. BBH have asked that Warnham PC contribute too as many

members from that parish. David now speaking with them. Paul Singleton and Nick Leach offered help with

• Floodlights - Ann reported on an LTA workshop she and Joanne had attended on possible funding from LTA.

from those present including difficulty of getting planning, electricity supply set up costs, environmental issues

and uncertainty on future of CC.

• Membership fees were discussed and it was decided unanimously to raise Family, Couples and Single adult

fees by £5. Junior and student fees to remain the same.

• It was decided to reduce guest fees to £2.50 per guest with a maximum of £5 payable per session (so if three

guests, one goes free) This was in response to the fact that non member court booking fees are only £5 an

hour and the previous guest fee was £4 which was considered unfairly balanced.

• Quiz - it was decided to hold another quiz in January. Ann to speak with Annabel and Mark to check if they are

happy to be quizmasters and to find a date.

report on number of entries received before deciding whether to hold a competition or not.

• Janet enquired whether the club had tried working with local schools. Mike was able to report on the

With no other matters raised, Mike thanked Joanne, Rosie and Jo for preparing and serving the food.