Haddenham Tennis Club has been extremely successful since it was formed in 1986. The club started with a group of individuals that thought the village could do with tennis courts for families. There was considerable pressure for local tennis courts due to the number of children who had started to play Short Tennis in the village using the village hall and the children achieved a lot of success. As the children got older and started playing tennis they joined local clubs including Aylesbury tennis club and parents were faced with regular travel.
The club was then formed and after some brilliant fund raising activity was able built two courts within a year and two years later a third court and installed floodlights on all three courts. The club now provides tennis coaching at all the Haddenham Schools and therefore encourages tennis to be part of the school curriculum.
The club has approximately 100 adult members and 80 junior members. Priority for club membership is given to all residents of the village and families whos children attend school at Haddenham.
There is a strong bias toward Juniors and full coaching and development programmes have been implemented. The club has a strong senior playing membership that has increased greatly in recent years. The club now runs many senior and junior teams. (2 Men's, 3 Ladies, 2 Mixed and up to 10 Junior sides). There are regular social activities, particularly during the summer season and all members and friends are welcome at these events.
The club has been particularly successful in the local leagues and national competitions and in 2003 surpassed all expectations with the with the Boys Under 17 team becoming National Champions in the National Junior Club League Championships and the Girls Under 15 side coming fourth in the country. The men’s and ladies senior sides have been in Division 1 in the local leagues and the Ladies National Club League side were Regional Champions in 2000.
The club has the use of the Haddenham Playing Fields Pavilion that has a fitted kitchen, toilets and showers and use of the Haddenham Sports and Social Club that has excellent facilities, which includes a well-run bar.
The future aims of the club are to produce a steady stream of talented tennis players for the club and county, along with a solid base of good club players. The club hopes to keep a balance of good standards of play and social activity. The club strives to keep and develop all facilities to the highest standards.
The club has just been awarded Tennismark accreditation which is a nationally recognised award confirming HTC as a safe, welcoming and inclusive environment for its members, players and visitors. 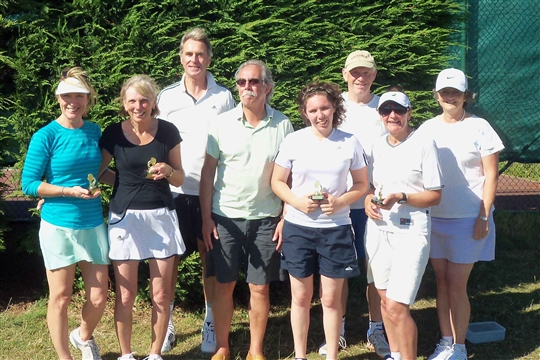