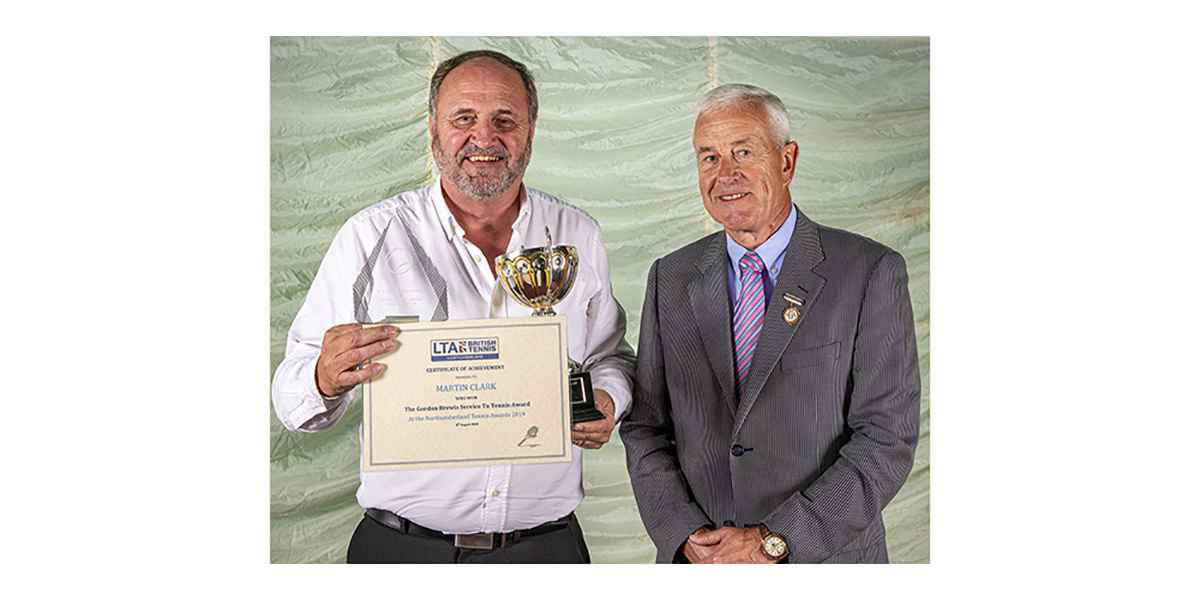 The Gordon Brewis Service to Tennis Award is presented annually to a person who has given outstanding service to tennis in the County over an extended period.

This award is in memory of Gordon Brewis who gave much loyal service to the County as Chairman and Treasurer and who was a key figure in the financing of the Indoor Centre after whom the Centre is named.

The winner for 2019 was Martin Clark, Secretary of Northumberland LTA.

Martin has followed a distinctive path in County tennis which has been focussed essentially on the organisational and managerial side of the game. Becoming a member of what is now the Northumberland Club some 40 years ago he threw himself into the life of the Club and in particular became active on the social side of the Club’s activities serving on the Club’s Social Committee and organising events and activities.

This led him in 1985 to becoming Chairman of the South Northumberland tournament, a tournament with roots dating as far back to the 1880s. Nearly 35 years later, he is STILL the Tournament Chairman, an event that is split essentially between the adult events under the South North umbrella and the junior events supported by Sport Newcastle.

The original South North tournament was held in Gosforth at what is now the South North cricket ground. The tournament was notable for its friendliness and the active social events which are fondly remembered today by players of all ages, particularly those who were juniors at the time. This was due in no small part to the efforts Martin in his role as the Tournament Chairman.

The fortunes of the tournament took a turn some 20 years ago, when land previously occupied by the tennis courts was sold on for housing development. Martin was instrumental in preserving the Tournament in some form by moving it to the County Ground with the support of the Northumberland Club, and here it has remained ever since under the watchful eye of its Tournament Chairman.

The role of Secretary is a key one in any organisation and that is equally true of a County Association. Apart from being the focal point for formal communications from the LTA and external parties, the Secretary is the co-ordinator who binds the Association together. In view of the close relationship between the Association and the Northumberland Club, the Secretary acts as a day-to-day link between the two organisations and as a member of the Club, he is ideally placed to see that the two organisations are pulling in the same direction.

As well as his role as Tournament Chairman for South North, and his position as County Secretary, Martin also took over as Chairman of the Northumberland Open Tournament in 2005. Until 4-5 years ago, the Tournament had a main sponsor and many will be aware that a major corporate event day was organised which incorporated an exhibition match involving two tennis legends. Martin was at the heart of the organisation of this event and acted as host to the legends and to the Corporate hospitality on the day.

All this involvement in Club and County tennis resulted in Martin receiving an ‘Unsung Hero’ from Sport Newcastle – a richly deserved recognition.

Chris Lott when presenting the award highlighted, “The Secretary plays a key role in supporting the Chairman in particular and the members of the Council generally and will find himself involved in all aspects of County affairs. His outgoing personality, approachability and willingness to always find a solution to any problem which arises, marks him out as the perfect holder of this key position and a worthy recipient of the Gordon Brewis Service to Tennis Award”