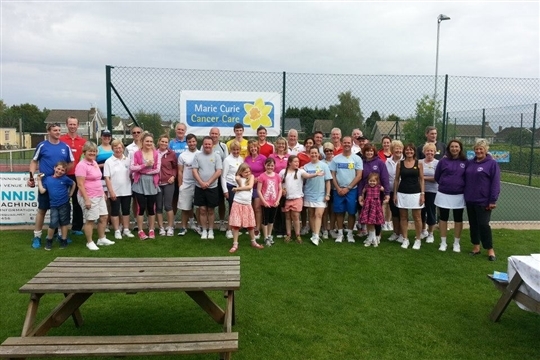 When PWLTC's parent institution, Windsor Bowling Club, was formed, tennis wasn't even considered. There was talk of croquet, badminton, archery and even rubber quoits, but no tennis.

In 1912, the Windsor Bowling Club was formed with Lord Windsor as the inaugural president.

1914 saw expansion and a request for more land granted by the estate.

By 1917, a proper court was in use and the Bowls committee had granted the secretary of the Tennis Committee attendance at the full committee meetings. There were two courts before long.

The uptake for tennis became far greater and there was another court by 1922. Membership was capped at 160.

By 1931, there was such demand by members that they even asked permission to use the courts on a Sunday.

In 1949, it was decided that the tennis part of the bowls club was all grown up and an agreement was made to remove its stabilisers on 1st January 1950.

1955 saw the acceptance of juniors under the age of 14. Talk of a new pavilion began for the club to provide more permanence and step away from the shadows of the bowls club.

January 1957 saw the LTA introduce a new foot fault rule. The official notification was put up in the club where it has been routinely ignored by almost everybody for over 50 years since. Extra junior members were allowed to join and an investment was made for a practice wall.

In the 1960s, a subcommittee was formed. There was also more focus given to the juniors with an official tournament and some sourced coaching.

1969 saw the Ladies' team reach the 1st division for the first and by no means last time. That summer saw the committee decide to abolish seedings in the open tournament setting a precedent that has lasted until today.

1970 saw a lifting on the junior limit. The practice wall still hadn't been erected but was still being idly discussed from time to time.

January 1971 was a key month because the bowlers secured a 25-year lease. As well as obtaining favourable terms, the stability helped the club plan for the longer term.

In 1981, the club went on tour to Germany and visited a club in Mainz.

1985 saw the four new courts at the bottom officially opened and the curtain was raised by international competition as Wales U16 took on Ireland U16. The club was still lacking floodlights.

In 1990, another LTA loan allowed the middle courts to be turned into all-weather courts. A 24-year lease was secured in 1990, which again opened the door to some potential projects.

In 1992, the LTA said that the club needed floodlights and hinted - with a fairly unsubtle hint - we could afford them. In September 1993 there was light.

In April 1994, the foundation for sport and art offered a grant as did the National Sport Council for Wales that was to be used for a clubhouse.

In 1999, the Community Tennis Partnership was formed with Rectory Road Tennis Club with the aim of promoting tennis to schools in Penarth. At the turn of the millennium the LTA issued its club vision and Windsor planned for the future.

In early 2000, Sportlot suggested an amalgamation of the two Penarth clubs and it is possible that both clubs are still trying to comprehend that idea and articulate a non-vulgar response.

2009 saw a renovation of the clubhouse and also the construction of a new show court.

The acceleration of developments in the past twenty years has really been remarkable and the 100 years was capped with new floodlights on the middle courts and all four bottom courts in 2014.

On 1st October 2015, the club was granted an independent lease that will come into effect soon meaning we finally officially leave the bowls club that created us. Almost nobody will notice a change but it's a charming way to signify the club coming into its own and getting ready for the next 100 years.

In 2015, WLTC was awarded 'Welsh Tennis Club of The Year' at the annual Tennis Wales Awards.

In 2016, the club saw the installation of 4 brand new state of the art Artificial Clay courts making us the first club in Wales to have artificial clay.

We'd like to thank everyone who has had a part to play in 100 years of forehand winners, missed smashes, agreements to take two, working parties, committee meetings, setting up, cleaning up, cutting grass, fixing fences, more missed smashes, fetching balls from the bowlers or the school, holding one's nerve in a tie-break, going to pieces in a tie-break and all the other things that so many people have loved since 1914.