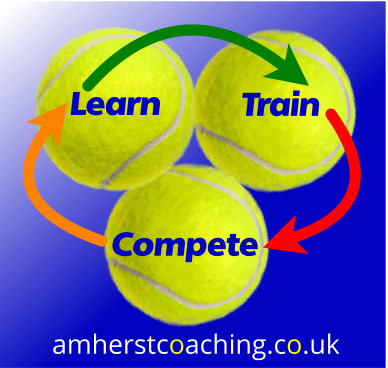 2. Rusty Rackets Group Only – Additional Special Rules
(This will be the lowest group in the Adult Mixed Singles league)

Two bounces are allowed during a rally

If the least experienced player agrees, the match can be played without one or all of the Rusty Rackets Special Rules.

3. Matches should be arranged by contacting your opponent in the league and setting a suitable date/time that is convenient for both sides.

4. All players should take responsibility for contacting their opponents and arranging suitable match dates.

5. Both sides should take responsibility for checking the Amherst Weekly Play Schedule. Limited court booking may be possible at Amherst for Box League matches at some stage in the future, but not at the moment.

6. Scores should be submitted online as soon as possible through the Amherst LTC Box League page on the LTA Competitions Platform by the winning player*. Results are then checked before final submission to the LTA for the ITF World Tennis Number calculation by your Amherst Box League administrator.

* As the season end approaches, it is your responsibility to ensure all of your results have been submitted, win or lose, before the deadline.

7. The court surface at Amherst for matches must be agreed by both sides or decided by a coin toss.

8. Incomplete matches must be finished at a time suitable for both sides providing it is concluded before season end.

9. Matches that are not completed and/or results that are not submitted before midnight on the day of 'season end' will not be counted.

10. Both sides should agree before the match between using:

11. Matches should be played in good spirit. Players are expected to be friendly with an emphasis on fair play.

12. Matches are self-umpired. Players should only call balls on their side of the net and should respect the calls of their opponent. If a player is unsure whether a ball is in or out, the benefit of the doubt and the point must go to their opponent.

13. Typically the top 1 or 2 players in each group at the end of each season will be promoted.

14. If there is a tie for first or second place, the winner will be decided based on:

- the most number of matches won,

- the least number of matches lost,

- who was the winner of their respective match,

- who conceded the least number of games (in matches they won),

- who won the most number of games (in matches they lost).

In the unlikely event that a winner cannot be established, then a final match up will be played at both players' earliest convenience.

15. Players found to be breaking the rules or knowingly exploiting the system may be disqualified from their division and/or served a ban pending a review by the club administrator.