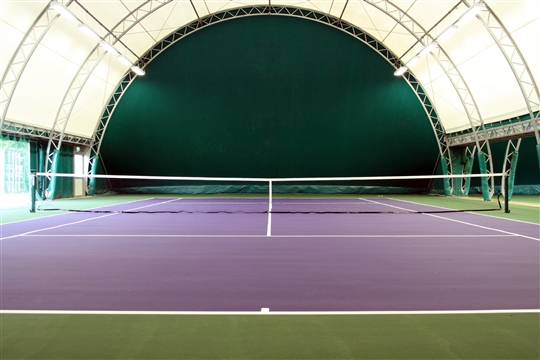 The Club has purchased a second hand 'framed Fabric' structure, which was erected by CopriSystems. The building has many advantages over the more common 'airhalls' (bubbles), from a playing point of view:-

1. The sides can be opened up in the summer, allowing natural ventilation of the building - it is usually cooler inside the structure than outside!

3. By managing the air flow through the building there should be little condensation.

4. The building does not require a fan to inflate it and therefore the playing environment is quieter.

Our three existing outdoor courts have been resurfaced with Porous Macadam, which has been chosen as it is a genuinely all weather surface. The courts a floodlit to achieve lighting levels similar to those used for proffesional tournaments.