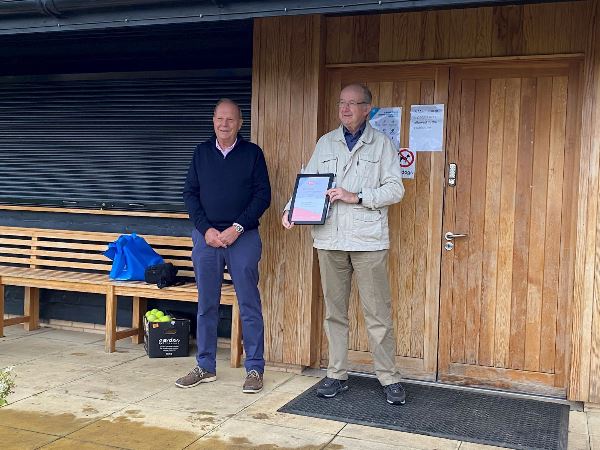 David Rawlinson, President of the LTA, visited the club at the beginnig of October to present Barrie Hunt with the Outstanding Achievement County Award for 2019/20.

We would like to congratulate Barrie as this is a very special achievement and is recognition for all the hours of work he has put in over the years to the club.

Barrie joined the club as a member is 2008 and in 2015 he took on the role of overseeing the relocation of our club to the new site. The move was completed in 2017 and Barrie became the Chair of the club. It is fair to say that the move involved overcoming significant obstacles and could not have been achieved without his remarkable determination, drive and selflessness during an uncertain period for the club. Over the period from 2015 Barrie  modernised and professionalised the club, drawing in new committee members and embedding a longer term sustainable approach to the club’s development. He also persuaded Justin Layne to come and take over the role of Head Coach. Under Barrie’s leadership the club achieved Tennismark in one year, raised funds for all our 8 brand new floodlights. The membership has doubled in size (particularly driven by younger families joining) and achieved charitable status.

Barrie’s eye for detail is legendary and has been focused on a deep love of the game of tennis and the need to pass that on to future generations. He has given so many hours of his time to make this club what it is today.