How did Grove Lawn Tennis Club come to be in existence? And why is it hidden away behind Millhouses Lane?

1870
In the 1870's the Midland Railway Company opened a 13 mile stretch of track up the Sheaf Valley towards Chesterfield, opening 4 new stations along the way. One of these was "Ecclesall" (later changed to "Millhouses and Ecclesall").

In the mid-1800s there were only 23 houses and a few file cutters' shops in the hamlet of "Miln" or "Mill" houses. All of this was to change when Oakdale Estates sold off parcels of land for development. There also existed an old coaching house, the "Robin Hood", a hostelry well frequented by Grove members past and present!

1886
In the late 19th Century there was considerable housing development of the area, now called Millhouses, and subsequently in 1886 the Millhouses Methodist Church, a church with which Grove has always had a close relationship, was built and in 1898 an Anglican chapel was opened on the site of what is now the Holy Trinity Church

1900
It was in this developing environment that our predecessors decided to develop an area stretching from Millhouses Lane to what is now Pingle Road as a private sports club, and "Millhouses Bowling and Lawn Tennis Club" was formed in the year 1900.

Little is known of the early years of the club's existence but one former member, then in her eighties, recalled Saturdays in Millhouses Lane, her father playing bowls, her mother croquet and she played tennis.

1933
The first Internal Club trophy was played for. It all started with the men's open singles, with the men playing for the H. T. Atkinson Cup. The first ever winner was called E. G. Luck.

1935
In 1935 the club changed its name to "Grove" to distinguish itself from the newly formed Millhouses Tennis club playing in the recently opened Millhouses Park. The club had by now both shale and grass courts, but after World War II the grass courts were never restored. 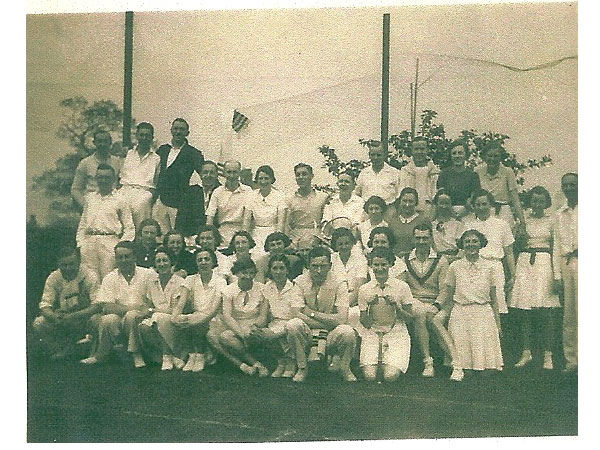 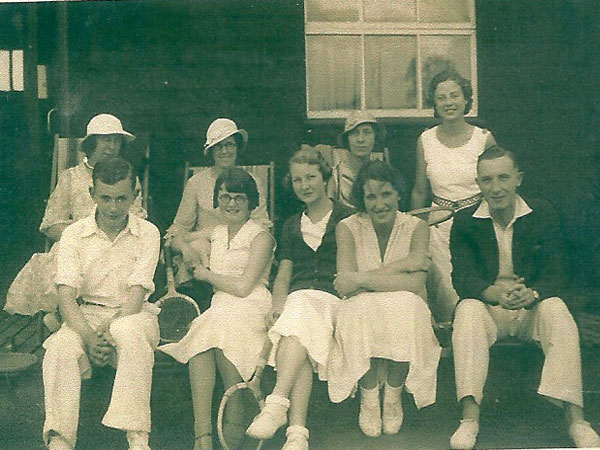 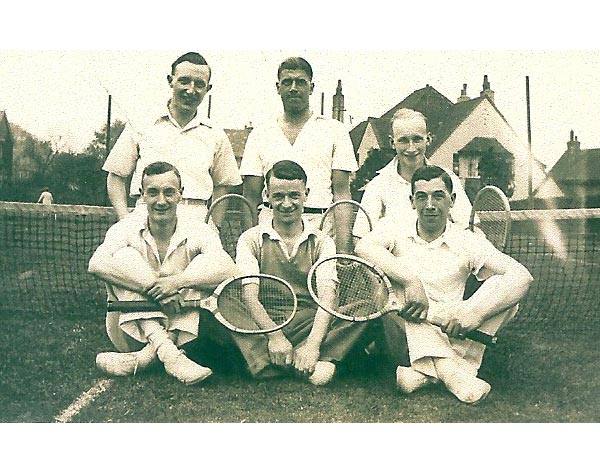 1946
In 1946 the Tennis Club became independent from the Bowling Club and began paying rent to the Earl Fitwilliam Estates on a 5 year lease, which made development virtually impracticable.

1958
The Mixed Doubles competition was added to the Grove Internal Club Competition. The first ever winners of the "Southfields Cup" were D. A. Hulley and G. A. Hulley.

1959
In 1959, land fronting Millhouses Lane was relinquished and a 21 year lease granted, thus allowing for development of the club. (Two houses were built on the land relinquished, and the long drive up to the clubhouse was laid, with a narrow entrance to deter residential development of the club. This narrow entrance has had to be taken into account when building works take place at the club). So, in that same year, the layout of the courts was redesigned with Court 4 laid parallel to Millhouses Lane, and refurbishment of the pavilion took place, and again in 1964, by which time all outstanding loans taken out in 1959 had been repaid.

1970
With a long term lease in place, the club felt able to improve the playing surface of courts 1/2/3 and in 1970, state of the art low maintenance porous courts - Tennis Quik - were laid (the first all weather courts in Sheffield), financed by internal fund-raising, LTA and members loans. For the first time, tennis became an all year round game for club members

About 1969/70 Earl Fitwilliam Estates offered the club the opportunity to buy the freehold and, after protracted negotiations, the deal was signed in 1975. The opportunity was gratefully grasped, allowing the club further scope for long term development, which dramatically became necessary with the partial destruction by fire of the old wooden pavilion on New Years day 1975.

1980
The next few years were spent designing and building a new brick clubhouse, which was opened in the summer of 1980. The subsequent granting of a license to allow the club the consumption of alcohol was pertinent in enabling the club to hold more varied social activities to help pay off the various loans used for the development.

1982
In 1982 the next major development of the club was the installation of floodlights on courts 1/2/3, with labour largely provided by members, a facility which Grove has made full use of, and has enabled the club to host an annual inter-club floodlit tournament which flourishes to this day.

1986
In 1986 the old Tennis Quik courts were replaced by Playdeck surface, financed by an external grant and a loan plus grants and loans from club members 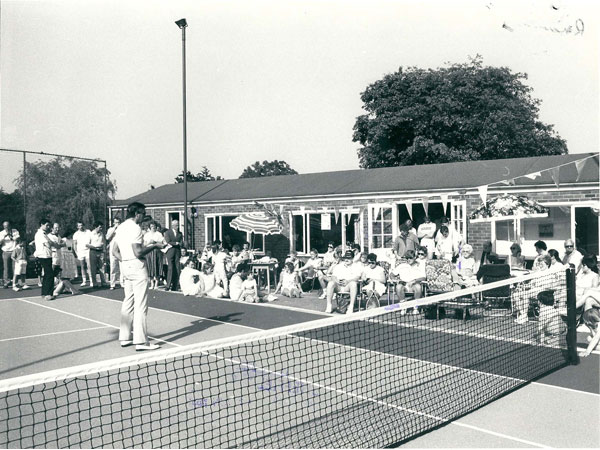 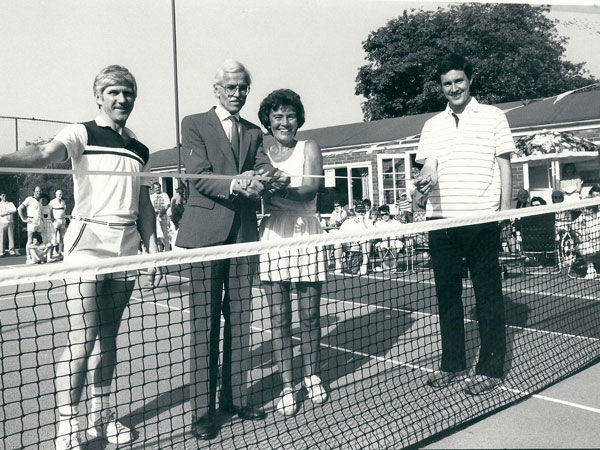 2000
Throughout the years Grove has always looked to the future, maintaining its facilities and when finance is available improving them. In its Centenary year 2000, further fund raising activities took place and all the members at the time paid a 3 year development levy in addition to normal subscriptions. Also, a successful "Friends of Grove" (names on display in the Club House) campaign was launched, where former members made donations to help assure the club's future, in the main as a token reminder of the happy times they had playing tennis at Grove.

In September 2000, Grove LTC held a Centenary dinner at Bramall Lane. This was a very well attended and successful evening. 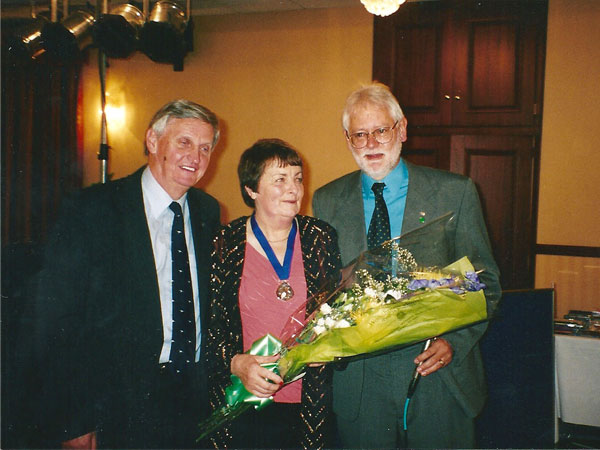 2001
These funds, plus a £20,000 loan from the LTA, enabled courts 1/2/3 to be relaid again in 2001. However, a grant of £20,000 from The Foundation for Sports and The Arts was also obtained, which enabled the very old shale court 4 to be converted to the same all weather surface at the same time. The 4 metre high netting surrounding the courts was also replaced. 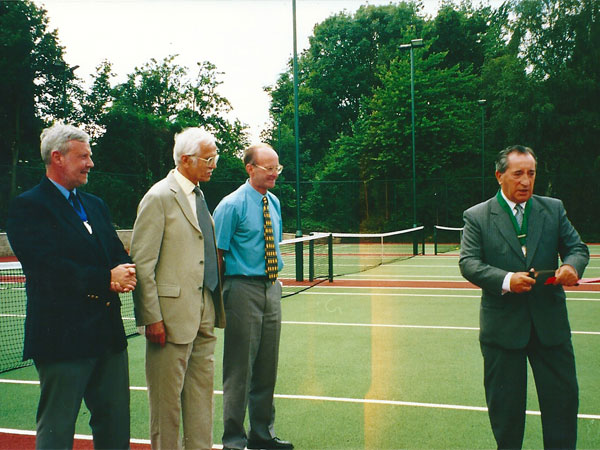 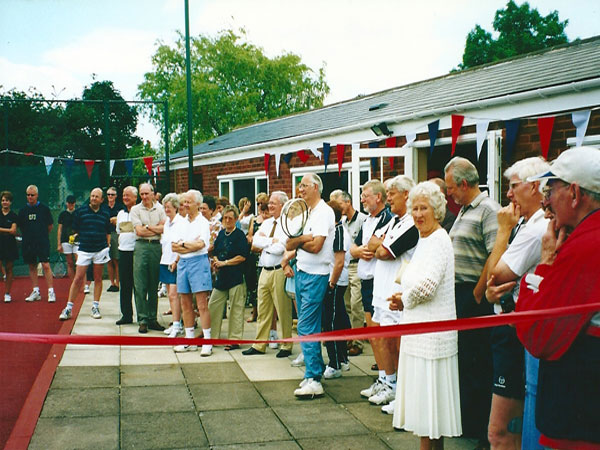 1st July 2001 - Opening of the new all weather playing surface. Also Dennis Webb, (past president of the S and D, Honorary member of Grove LTC), "cuts the tape"

2007
A further development was the replacement of the floodlights in 2007 with new metal halide lighting to county standard, which required the provision of a three phase power supply installed by the Yorkshire Electricity Board up to the foot of the drive. In turn this required new cabling up the full 80 metre length of the drive to the clubhouse. This was achieved by cutting through the reinforced concrete layer of the driveway, and then digging a trench of suitable depth to take the new power cable and other utilities. All this proved quite a task. The total project cost of £32,000, including floodlighting contractor's costs, was totally financed from the club's own development fund.

All the above means that, at the date of this report, the club has first class facilities, thanks to the past efforts of members, and with some external financial help. However, we must continue to maintain and develop the facilities.

Since 2001, quite apart from maintenance financed out of current revenue, the club has been building up a totally separate fund to replace and improve the major assets as and when required, hopefully without needing to access external finance (especially important in view of current financial restraints).

This short history of the club, deliberately names no individuals, so many having given their time, efforts and money to maintain and develop the club. So many people have happy memories of their time at Grove and long may it continue. 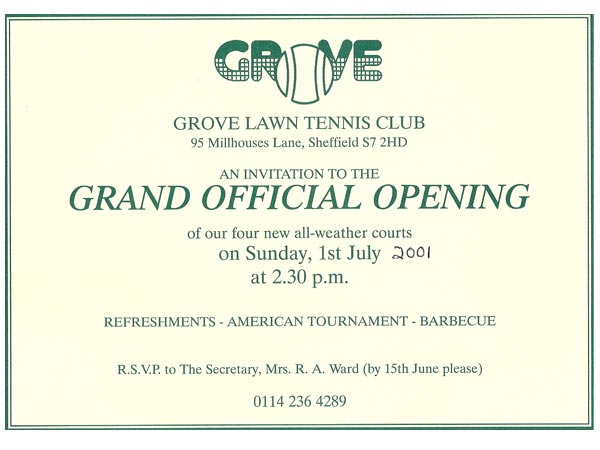 An Invitation to Grove LTC