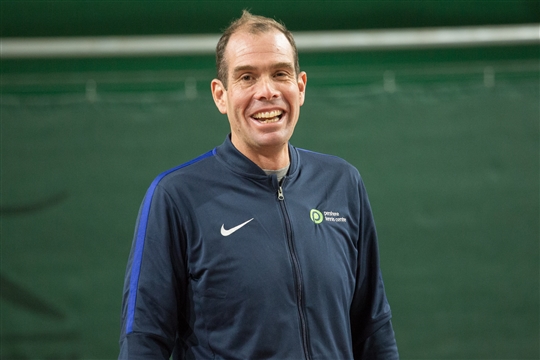 More than 20 years coaching tennis. Simon has returned to Pershore having spent 11 years at the East Gloucestershire Club, Cheltenham. Since 2006 Simon has been the Tennis Manager at the 27 court club.

Doubles Club Champion at East Glos on 2009 and 2010 5 time singles club champion at Pershore. Member of the Pershore team that won the Swas Division 1 title 3 times.

Individual coach to Chris Morrow (Beckford) from 2005 to 2013. In this period Chris won the Road to Wimbledon national final in 2010, Aegon 14&U Masters in 2010 and Aegon 16&U Masters in 2012. Combining a History Degree with Tennis at Harward University. Worked with players who have won 10 county singles titles between them. I was individual coach to each of these players for a minimum of 3 years. Gloucestershire LTA Coach of the Year and in 2010 Shortlisted in the Club Coach category at the LTA awards.

A positive and enjoyable one that achieves improvement. I am confident with my methods and have achieved success with novice players through to county champions.

Have 2 lakeland terrier dogs which Sara (my wife) and I indulge with lots of walks. Enjoy food (cooking and eating). Love getting on the golf course in the summer.