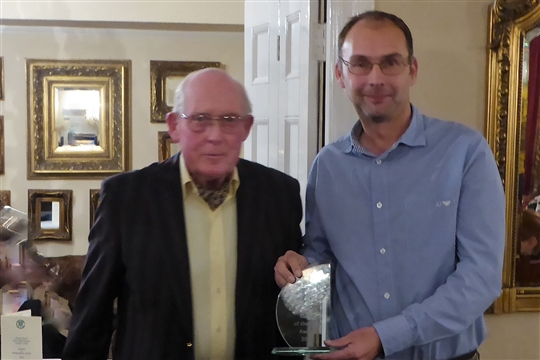 The 2016 Annual Awards Presentation and Dinner was held at the Wheatsheaf, Beetham on Friday 18th November, organised by Margaret Hesmondhalgh and Clive Pollard.  40 people, including many juniors and their parents, enjoyed a 3 course meal and a fun Christmas song quiz, followed by the presentations.

Photos from the evening can be seen here - in addition to this photo of Jon Griffin, receiving his well deserved Cumbria County Coach of the Year award.  The long list of Junior awards that were made are largely due to his and Max's coaching over the years and are listed below.

The Senior Awards were as follows, with the coveted award of the Sue Pollard Trophy for Club Person of the Year going to Rae Martin for all her efforts as captain of 2 teams for several years, clubhouse cleaning and behind the scenes contributions to the Club.