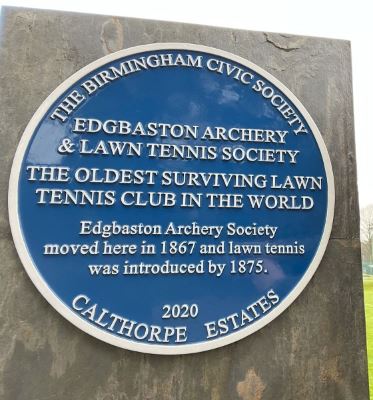 In 2020, Birmingham Civic Society awarded us a Blue Plaque to commemorate the club's place in lawn tennis history.  Inaugurated in 1860, the Edgbaston Archery Society moved to its current premises in 1867 and is thus celebrated as the oldest surviving lawn tennis club in the world. The plaques now take pride of place in two locations at the club: the first at the entrance to the pavilion, and the second on a freestanding plinth situated on the boundary with the Botanical Gardens.  Thank you to Club Trustee Robert Holland for his tireless work in making this happen and to the generous donations from members and supporters.

On 16th February 1860 there was held at the Midland Institute, Paradise Street, Birmingham:

"a Meeting of Gentlemen favourable to the formation of an Archery Society at Edgbaston".

A resolution was passed at this Meeting that letters should be "sent to principal families in the neighbourhood, with a request that they will state, before 3rd March, whether they wish their names to be added to a list of subscribers to the Society".

The response was such that at a further Meeting on 5th March, 1860 at the Old Library, Union Street, it was resolved "That in the opinion of this Meeting the Society shall be forthwith formed". Edgbaston Archery Society had been born.

The Society was never overloaded with funds, although there is evidence that whilst they held their Archery Meetings, they did the thing in style and used to have a military band from Great Brook Street, one that is quoted in the Minutes several times as "the band of the Royal Dragoon Guards".

It was in March 1870 that the game of croquet was introduced, by resolution, which allowed play "after the shooting at the Meeting, but at no other times on the actual archery ground". A month or two later, Monday and Friday evenings were set apart for croquet and in the same year the name of the Society was altered to include croquet.

Lawn tennis appears to have crept in between 1873 and 1875. It was well established by this latter date - two years before the first championship meeting at Wimbledon, and while the game was still going through the process of codification - as evidenced by a circular which contained the following announcement:

"Weekly Meetings are held during the summer for archery, croquet and lawn tennis, at which numerous prizes were distributed." 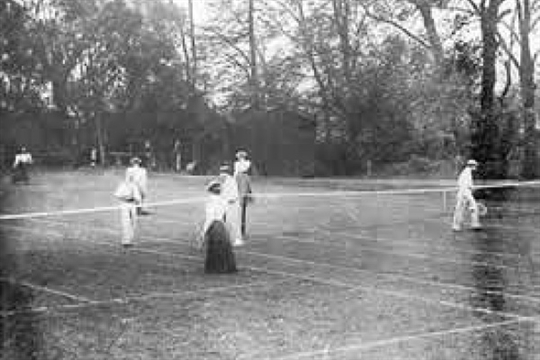 This was only eighteen months after Major Wingfield had brought out a game called "sphairistrike", originally thought to be the first game of tennis. However, it is now known that the first game, then known as "Pelota" had been played by Major Gem, Clerk to the Birmingham Magistrates, and Mr. J.B.A. Perera, a merchant of Great Charles Street, Birmingham, in 1865. The game had been played in the garden of a house known as "Fairlawn" in Ampton Road, Edgbaston, and there is a plaque to commemorate this event on the front of the house.

About 1870 Major Gem and Mr. Perera moved to Leamington and in 1872, in conjunction with two local practitioners formed the world's first Tennis Club in the grounds of the Manor House Hotel. This Club did not survive for very long, although there is today, of course, a Leamington Club.

After Leamington, the first Club to take up the game of Lawn Tennis appears to have been Edgbaston Archery and Croquet Society, although it must be admitted that the Edgbaston Cricket and Lawn Tennis Club and Solihull Lawn Tennis Club must run it fairly close. However, the evidence supports that, with the demise of the original Leamington Club, the Society is the oldest surviving tennis playing club in the country and, therefore, by implication in the world.

How early the Society was in fostering the development of the game can be gathered from a study of the 1875 Fixture Card, a gilt printed circular which shows that Lawn Tennis Meetings were fixed for Saturday afternoons in May, June, July, August and September, with the statement:

"Prizes for Lawn Tennis for ladies and gentlemen. Prizes for double-handed games for May and June. NB Further prizes will be offered if sufficient interest is shown".

OLDER THAN ALL ENGLAND CLUB

In this small way began the great open tournaments of today. On 21st March 1877 the Annual Meeting decided to alter the name of the Society to "The Edgbaston Archery and Lawn Tennis Society", the name which has been retained ever since. This was some three weeks prior to the All-England Croquet Club adding "lawn tennis" to its title, a few weeks before it announced the first Championship Meeting.

The rapidly growing hold of the game was reflected in the decision that the "the game of lawn tennis shall be permissible on Monday and Wednesday after five o'clock, alternate Saturdays, all day, and the weeks when archery comes on Saturdays, Fridays after five o'clock and also after the archery Meetings" - and we think the arrangements for play today are confusing!

On 25th November 1867 at a Meeting of the Committee held at the Plough and Harrow Hotel, Hagley Road, Edgbaston, the decision was taken to move to the present premises at the Botanical Gardens. The Society was invariably known as "The Gardens" up to fairly recent times.

In 1880 the "Laws of Lawn Tennis" appear in the Society's printed handbook, including those governing "The Three Hand and Four Handed Game". Croquet now appears to have been ousted by this new game. Lawn Tennis was going hand-in-hand with archery and meetings at which prizes were given for combined proficiency at these pursuits were being held.

One interesting notice states "Arrangements will be made by which Members who do not possess bows or tennis rackets will be provided with them for the occasion". Another notice of a lawn tennis prize meeting on 21st May 1888 reads "Matches for one lady and one gentlemen v. one lady and one gentlemen, handicap, will be arranged". This presumably, was the original and dignified form of styling a mixed doubles match.

By 1882 lawn tennis was of sufficient importance to have its own fixture card which shows that matches were held against Solihull, Leicester, Halesowen, West Bromwich, Kidderminster and Leamington, as well as four fixtures with the Edgbaston Cricket and Lawn Tennis Club. This latter club was already holding a six-day open tournament at Hall Hill Road, the date in the Society's 1882 fixture list being 23rd to 29th July. In 1884 the first Tennis Committee was formed and the following year the whole of Mondays, Wednesdays, Thursdays and Saturdays were given up to lawn tennis.

In 1886 there is reference to seven courts and it is in that year that the first challenge prize was donated for ladies. The exact date when archery dropped out all together is not recorded. The bows and arrows existed until 1925, when the pavilion in which they were stored was destroyed by fire.

Since those days the Society saw out the second World War with a flock of black faced sheep grazing on the grass courts - 'doing our bit' as it was then known!

Numbered amongst six clubs which were founding members of the Warwickshire Lawn Tennis Association in 1896, the Society has not only maintained its membership but other closer involvement over the years. Since the War many of the Society's officers have served on the WLTA Council, most notably Desmond Robinson and George Pearsall who have held the post of President. Following a second fire, the current pavilion was opened in 1964 by Pip Jones, husband of Ann - the 1969 Wimbledon Ladies Singles Champion. This provided better facilities for a membership enlarged by the arrival of a number of players from the Harborne Tennis Club (1883 - 1963), whose grounds in Tennal Road had been given over to residential development.

Between 1982 - 1986 the Society was the venue for the annual Prudential Junior Hard Court Championships of Great Britain and, in addition, has played host to many international players eager for pre-Wimbledon grass court practice including Jimmy Connors, Martina Navratilova and Steffi Graf.

Coaches come and go but one of the most notable to spend some time at Archery was Joaquin Loyo-Mayo. Joaquin had been a Davis Cup player for his native Mexico between 1965 - 1979, was world ranked No 1 at 18 years of age, had reached the last sixteen both at Wimbledon and the US Open and had won a record 10 singles and 7 doubles Mexican National Championship titles.

The 125th Anniversary in 1985 was celebrated in style with a costume tournament for members, many of whom played with antique racquets found in attics and at the back of wardrobes! Featured on local television, the event was attended by the Lord Mayor of Birmingham and the then M.P. for Edgbaston Dame Jill Knight.

With the advent of artificial grass in 1987 the Society was one of the first clubs in the region to convert two courts to this surface. Floodlit, these extended considerably the tennis playing season for the members. From that time membership has grown apace and a major redevelopment of the pavilion was completed in 1994.

In April 1999 a team from the Longwood Cricket and Tennis Club, of Boston, USA, were welcomed to the club on the weekend of the USA versus Great Britain Davis Cup tie at Birmingham's National Indoor Arena. Thus the oldest tennis club in America met the oldest lawn tennis club in the world - both keeping up the tradition of grass court play on their respective sides of the Atlantic! By 2001 the club numbered around 400 members with a strong contribution from Juniors who play in a myriad of different competitions. Also in 2001, the club became an all year round accredited Mini Tennis centre.