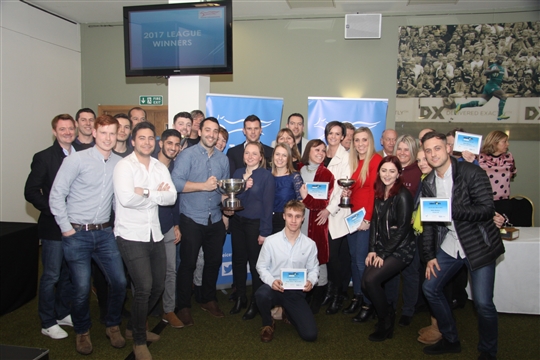 Despite the arctic weather,  county tennis enthusiasts from all points of the Leicestershire and Rutland compass descended on  the Leicester Tigers' conferencing suite for their annual awards evening.  A record turn-out of over 330 local players, coaches and club officials heard Davis Cup coach, Leon Smith, give entertaining insights into his keys to success in team management, that culminated in GB's historic Davis Cup win in 2015. There was also a video link to Mexico with Woodhouses Eaves', Katie Boulter, who was given a a special award in recognition of her break through year which saw​ her ​play in the main Wimbledon draw and represent GB in The Federation Cup.

Leon Smith was joined by county tennis President, Mark Cox, himself a former world no 13 in his playing days, in an interesting Q & A session with the audience asking a wide range of tennis related questions.

Newly created club,Melton Mowbray, who have only been in existence for a year, were stars of the evening, stepping up to collect no less than 10 league winners' trophies in addition to the prestigious, Leicester Mercury Cup, the county's century old solid silver mixed knock-out trophy.

Leicestershire runs the second highest number of competitive leagues of any county in Britain. All the winning teams from men's, ladies', mixed and seniors' leagues were presented with trophies on the night.

The opportunity was also taken to present special awards for Tennis Leicestershire's own awards categories as well as LTA awards. The winners of these were:

Tennis Leicestershire chairman, Mike Piper,  who was MC on the night, took the opportunity to present a special award to Vice President, Mike Harrison, for his years of service to Leicestershire county tennis.