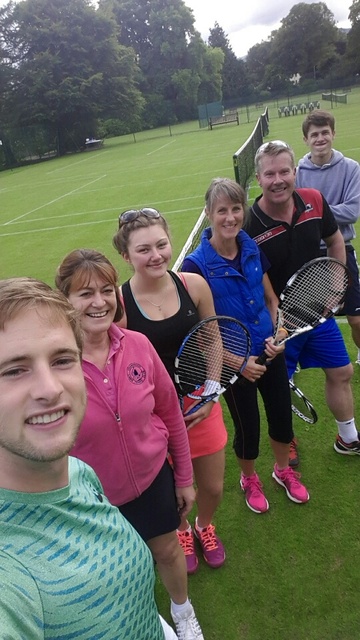 On what turned out to be a beautiful warm sunny evening last Tuesday, Keswick Ladies second team played a match against Whitehaven that had been postponed due to bad weather earlier in the season. The match was played on the grass courts in the Upper Fitz Park and was accompanied thoughout by devotional music from the Convention tent nearby which evoked a rather surreal atmosphere though without distracting from the enjoyment of the match!

The home team’s first pair, Ali Lightford and Janaki Spedding outplayed the opposition with Ali dominating the net while Janaki covered the back court which proved a very successful combination on the night, resulting in them winning all four of their sets with the loss of only 5 games.

Our second couple, Sally Lansbury and Timea Vismathy also achieved a great result, with a 6-2, 6-2 ; 6-2, 6-5 scoreline. They played consistent, accurate tennis and despite this being their first time playing together in a match they proved to be a successful pairing. The final result of the match was, Keswick 8, Whitehaven 0.

This is the first time that Keswick have fielded a second ladies team in the league and at the moment the team are placed in a very respectable third place. Several of our lady members are enjoying match play for the first time and two of our juniors are playing their first season in the adult league which is a very encouraging development for the club

In the Mixed Doubles competition, Keswick’s first team played their opening home match of the season against Seascale 2 on the Upper Fitz Park grass courts last Thursday evening in ideal conditions. There are three pairs in mixed teams, so there are 18 sets to be played, which often means that the match runs into the twilight and later and Thursday’s encounter was no exception ; mixed teams need keen eyesight and night-vision can prove a match winner!

Rob Saxton was paired with Rachel Bazire and together they played some terrific tennis winning their first four sets 6-0, 6-0 and 6-2, 6-1. In the final two sets of the match they struggled against the opposition’s first pairing however and despite taking both sets to tie breaks in a lengthy match they lost narrowly 5-6, 5-6.

Rob Moir partnered Keswick School student Anna Hollinshead for the first time with great success. Both players are strong both from the back of the court and at the net, a combination of strengths that allowed them to dominate the game and win without losing a set, the scores being 6-2, 6-2 ; 6-1, 6-5 and 6-0 6-0.

Team Captain Dougal Atack and Julie Saxton were our first couple and much was expected of them despite the fact that Dougal was not only suffering from a nasty cold but also from a painful recurrent back injury which forced him to serve underarm. Nevertheless, undeterred by these handicaps, they played astonishingly well and took all six sets in fine style to win 6-2, 6-2 ; 6-2, 6-3 ; 6-0, 6-0. This win clinched victory for Keswick, who are undefeated this season in the first division of the mixed competition, by a resounding margin of 16 sets to 2.