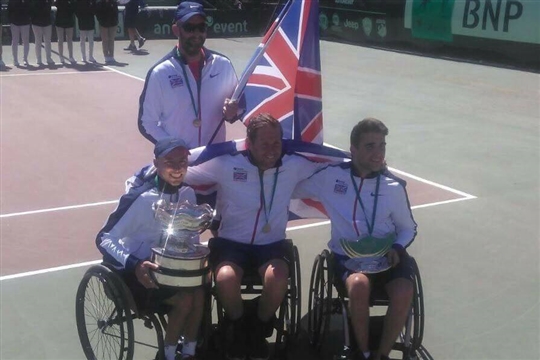 May 7th saw two Loughborough-trained wheelchair tennis players, Antony Cotterill and James Shaw, world numbers 8 and 11 respectively, lead the GB Wheelchair Quad Team to the gold medal in Sardinia in the World Team Cup, the equivalent of the Davis Cup.

Along with fellow teammate Andy Lapthorne they produced solid performances in the group stages followed by a crucial semi-final win against the top seeds USA before facing Israel in the final. James kicked off the final proceedings losing a hard fought match to London 2012 Gold Medallist Noam Gershony before Andy levelled the tie winning his singles. Antony and Andy, winners of the World Doubles Masters title before Christmas, then paired up and secured a comprehensive doubles win to take the tie 2-1. For James and Antony who train at Loughborough Lawn Tennis Club, it was the product of years of hard work and they can be rightfully proud to take take their place among an elite group of wheelchair tennis players with this being Antony's second World Title and James' first.

In addition to James and Antony's success, mid February marked the arrival of the Tennis Foundation's first Visually Impaired tournament of the year, with 32 players from across the country descending on the University tennis centre and 27 volunteers, the majority from Loughborough Lawn Tennis Club and the Inside Out Tennis coaching team, involved in variety of roles across the day. As the sport builds its case for Paralympic status, the athletes involved certainly deserve their chance on the world stage as spectators witnessed a series of fiercely contested matches of the highest quality. 4 of the players involved have since been named in the 6 player GB squad travelling to Spain for the first ever International Visually Impaired Tennis Tournament in early May.

Tournament organiser Jonny Rudge said “until people spectate at events like these, they don't realise just how incredibly dedicated and talented these athletes are. Tennis is a surprisingly adaptable sport which opens it up to countless potential groups of players. I certainly hope one day I'll witness some of these players representing their country and picking up international honours. We'd love to have the event return to Loughborough again in 2018”

Off the back of that, the first of National Wheelchair Tennis tournament of the year also arrived in Loughborough in late March breaking all kinds of records along the way. Now into its 4th year, the tournament attracted 42 players, including 16 in the junior tour, a record entry for any domestic wheelchair tennis tournament outside of the National Championships.

With the expanded entry, featuring a number of winners and finalists from the 2016 National Series finale, the tournament occupied all 8 indoor courts at the University tennis centre for two full days. A number of the players involved will be looking to use this tier of tournament as a springboard to international success in the future but equally satisfyingly were the number of novice players in the field proving just how quickly the sport as a whole is growing.

Martyn has also recently been instrumental in the design of a new affordable grass roots tennis wheelchair. Working in partnership with Roma Sport, Martyn helped develop a range of chairs in a variety of sizes which are 60% cheaper than other entry level models on the market whilst still delivering on performance. Cost is often highlighted as a barrier to entry for the sport and the hope is that the new chairs will allow participation levels to soar in the wake of success for British athletes in the sport over the past few years. Martyn said “We knew the need was there for a cost-effective chair for beginners that was safe, mobile and would give players the best possible experience of playing tennis...it's great to see the development process come to fruition and players using and enjoying the new chairs”

If players would like to find out more about disability tennis opportunities in the area, they should contact Martyn at Inside Out Tennis at [email protected]