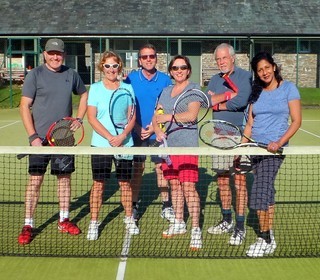 The second division mixed match against Lorton, which was interrupted by rain earlier in the season, was completed last Thursday, or almost completed as once again the heavens opened sending the players scurrying for the club house to shelter from from the deluge before the final sets were finished. There was no chance of finishing the match which was declared in Lorton’s favour as Keswick were trailing too far behind for the last three sets to matter. Ian Hollinshead captained the team partnered by his daughter Anna, they were the only one of Keswick’s couples to take a set from what proved to be a very strong Lorton team. Making up the other two pairings of our team were Janaki Spedding and Pete Armstrong who played together as third couple and Tony Proctor partnering Sally Huit our second pair.

The mixed second team travelled to Seascale on the previous Thursday for their last match of the season, they were at full strength and the weather in the west was favourable for tennis. Pete Armstrong and Janaki Spedding, playing as third couple, overcame their opposite numbers and the opposition’s second pair to contribute a very commendable four sets to Keswick’s total, a score which was matched by Tony Proctor and Ali Lightford our second pair. Our first couple however, Ed Ma and Sally Huit struggled against the Seasiders’ lively first pair and finished the night similarly with a tally of four sets, so the score was 14-4 in Keswick’s favour. The rain held off during the match in Seascale though it clouded in so that the final sets were played in encroaching gloom making the result of the last few points a matter of chance, owing more to night vision that ability with a racquet. Nevertheless Keswick were happy with the result which left them in third position in the league table this season.

Keswick’s first mixed team, captained by Dougal Atack, who are also in the second division of the league, topped the table and will be promoted to play first division tennis next year.