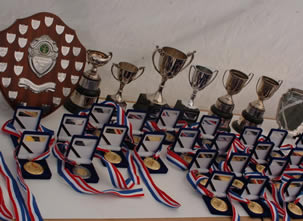 The events in the 2021 Club Tournament are now well under way.  To see the  latest results take a look at the tournament results

The Club Summer Tournament is a hugely popular event running from early May to early September. It ends with one of the highlights of the club summer season - our Finals Day which takes place on the second Sunday in September. When entries are open you will be notified in a club newsletter;  entries should then be sent to the Club Tournament Organiser.

All club members are eligible to enter the tournament and juniors who can play confidently with adults are encouraged to take part in the adult events as well as their junior age groups.

Junior (14U) Singles (played in line with Road to Wimbledon timetable)

Finals Day combines a high standard of tennis with an excellent all day social event for both players and supporters and is one of the high points of the Wortham tennis calendar.

The purpose of the tournament is to provide enjoyable, competitive tennis for all Club members, irrespective of ability. The principle of the event is to play tennis and, therefore, we will only award walkovers in unavoidable circumstances.